The ‘yarnbombing’ has already started in the town centre and the knitted creatures will be in place for all of August. The crafters and their supporters have done a fantastic job and it brings a smile to everyone’s face.

Dereham Community Crafters also plan to place more furry friends in the Ellenor Fenn Garden when it opens. If the garden is ready for the bank holiday weekend at the end of August, there will be an opening ceremony as well as events within and next to the new community space.

Members of Breckland Council and volunteers from the Dereham Crafters group have been out in Dereham to take a look at the ‘Celebrating Dereham’ yarn bombing event which has now officially launched.

The display of knitted creations was created by Dereham Community Crafters and funded through Breckland Council’s Market Towns Initiative.

Judy Rogers from the Dereham Community Crafters, commented: “It has been an amazingly positive community project to be involved in, especially since the Covid pandemic and the various lockdowns.  As crafters we wanted to play our part and give back to the community,  bringing some colour and joy back into the world.

“The yarn bombs have taken several months of careful planning and knitting in secret and involved hundreds of balls of wool, so many I think we have lost count! A dozen local crafters have been involved in this project and I am immensely proud of the finished work. We hope the yarn bomb installation gives everyone a smile when out and about in our town.” 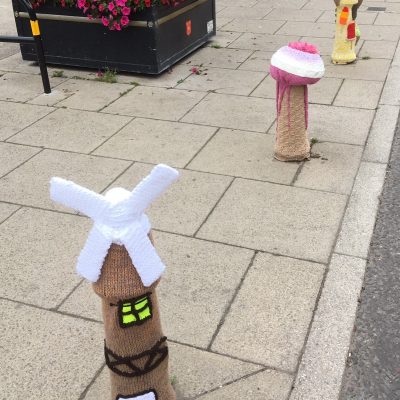