A legendary sportsman hailing from Norfolk has been nominated to be a Commonwealth Games batonbearer.

Mick Gault, who lives in Toftwood, Dereham, has been put forward to carry the Queen’s baton in the build-up to this summer’s sporting extravaganza in Birmingham.

The baton relay, which will travel to every region in England, is much the same as the Olympic torch tradition which precedes each games. Mr Gault competed in shooting at six editions of the Commonwealth Games, winning 18 medals along the way. His bronze in the 10-metre air pistol event at Glasgow 2014 brought him level with fellow shooter, Phillips Adams, but Mr Gault’s nine golds put him top of the pile.

Having learned of his nomination, the 67-year-old said: “From what I understand, this is pretty much exactly like carrying the Olympic torch. In my opinion, it is better – but then again, I would say that! I did actually carry the Commonwealth baton many years ago, and had to run it round Norwich. I don’t do much running these days, though. It really is an honour to be nominated, and I was delighted to accept it. It would be a pleasure to work with Team England and the Commonwealth Games again because I have got 30 years of history with them. It is just a nice feeling to be recognised, and good to know your achievements have not been forgotten.”

Having suffered from ill health in recent years, Mr Gault seldom picks up his trusty pistol – unless he is passing on his wisdom to the next generation. He has recently been coaching talented teen Daisy Sexton, from Billingford, who has already taken part in the British Shooting School Championships.

Mr Gault was initially nominated to be a batonbearer by his good friend, Andy Sullivan, who runs Norski Noo’s Gallery in Dereham. He added: “To be honest, I don’t think Mick has ever had enough recognition. You look at all these stars who are famous for running 100 metres. Mick had the same level of dedication for 24 years to do what he did, and people still don’t know about his achievements. It is time to really celebrate people from our town who have done well for themselves.”

Mick Gault is the most decorated Commonwealth Games competitor of all time. 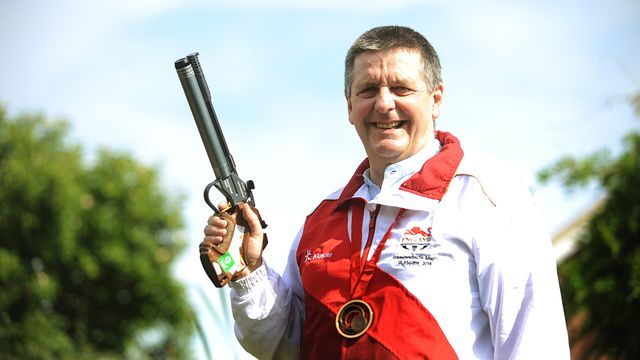