Ss. Peter & Paul, Scarning has a fine ring of six bells, which are listed as being of historic significance. With a tenor weighing 14 cwt, the bells could perhaps be described as ‘heavyish’, though they are far from the heaviest. The tenor at St. Nicholas, Dereham, for example, weighs around 22 cwt. Note that bells weights are still quoted in Imperial measure, and most bell ringers would give you an odd look if you told them that the Scarning tenor weighs around 700 kg. The bells produce a mellow sound, but with plenty of volume. The ringers stand at ground floor level rather than in a ringing chamber higher up, and the base of the tower is open to the nave of the church. This is appreciated by visitors and congregations, who enjoy seeing the ringing taking place.

The church was built entirely in the 15th century, though not all at the same time, the tower being constructed last. An inventory carried out in 1553 records that there were three bells, plus a ‘sacring’ (sanctus) bell. There is still a sanctus bell and it is worth looking at if you visit the church.

Five new bells were cast at the end of the following century but it is not known for certain what happened in the meantime. One account says that the original three were still there and were broken up to provide metal for the new ring of five, but it is also possible that they were removed and sold much earlier, as happened frequently at the time of the Reformation. The five new bells were cast by Charles Newman, the tenor in 1703, probably at Horstead, and the others in 1697, probably at Blakeney. It seems likely that five bells were cast in 1697 and that the tenor was recast six years later as a result of cracking or being faulty in some other way. This was quite a common occurrence, particularly with larger bells, which are difficult to cast. Most surviving Charles Newman bells exist as singles and a complete set of five is rare, so we are fortunate to have these. 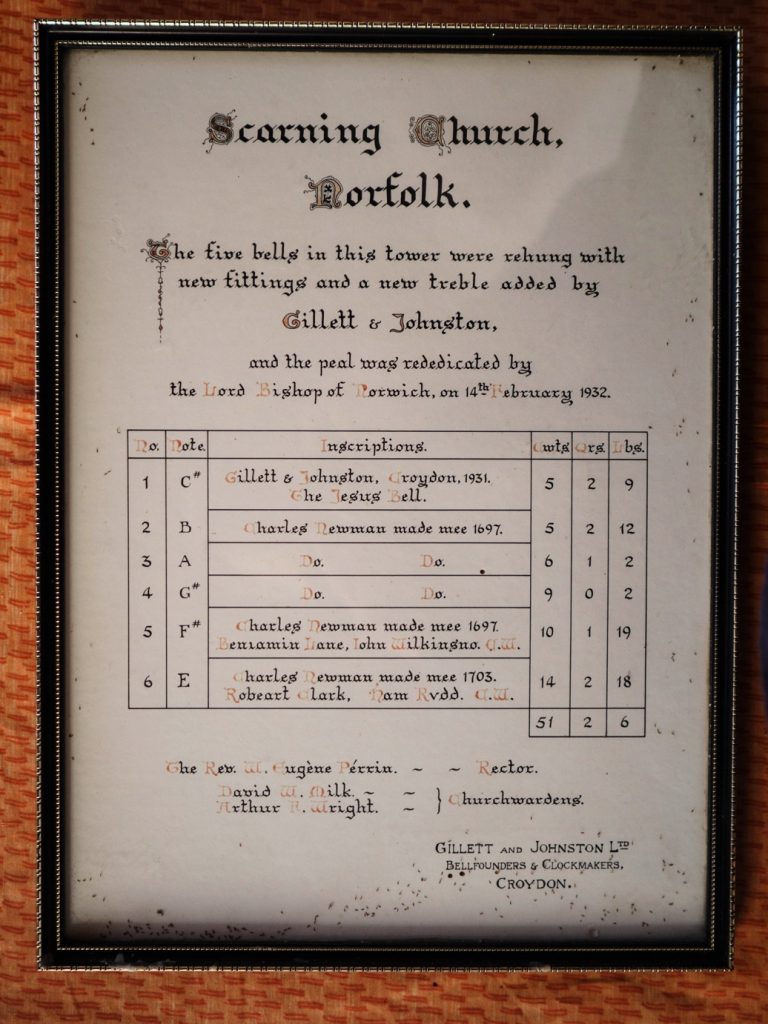 There were extensive alterations and restoration in the church in the 1850s, carried out by Thomas Jekyll, but nothing of significance was done to the tower until Augustus Jessopp financed its restoration in 1894. However, at some point, probably the second half of the nineteenth century, a new bell frame was installed with room for six bells.  Throughout this period the tower had its ring of five Newman bells and it was not until 1931 that a new 5 cwt. treble was finally added by Gillett and Johnston, who at the same time rehung the bells in the existing frame

During the latter part of the 20th century, there was no regular band of ringers at Scarning and things went into a decline. When ringing was specifically requested such as for a wedding, volunteers would come from Dereham and elsewhere, clear the clutter from the ringing chamber and do their best. It was not until 2009 that two retired couples in the village decided they would learn to ring, and with tuition at Dereham and Gressenhall, they did just that. Thanks to their enthusiasm the ‘Scarning Four’, as they became known, formed the nucleus of what has now become an autonomous band of Scarning ringers, all living in the parish. The legacy of close cooperation with the St. Nicholas ringers at Dereham has been maintained and there is a constant to and fro of ringers between the two towers.

Back in 2009, the bells had a reputation for being difficult, and it was the sort of tower where people would say, ‘If you can ring here you’ll be able to ring anywhere’. This was not entirely unfair, but the problem was mainly the result of lack of use and basic maintenance rather than anything intrinsically wrong in the belfry. Regular ringing has made a big difference and the ringers have also been engaged in a rolling programme of maintenance and upgrading which, whilst less newsworthy than a re-hang, has resulted in a considerable improvement in the ‘go’ of the bells. At this point, they handle better than they have done at any point in the life of the current band. 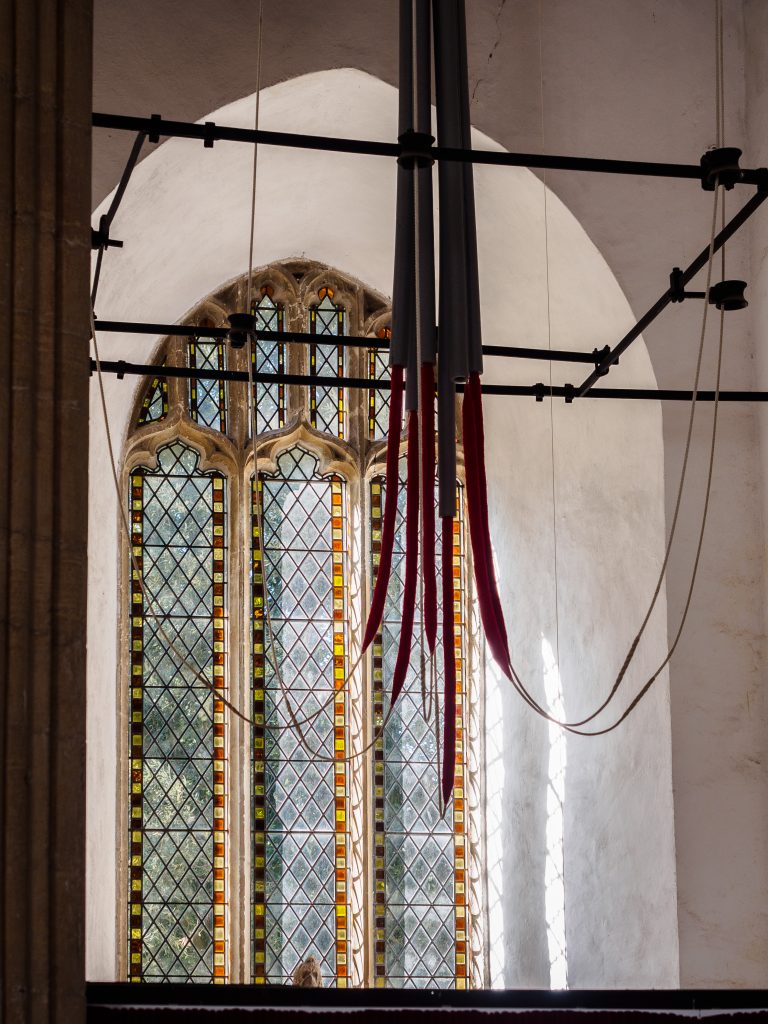