Farming in Scarning – 40 Years Ago 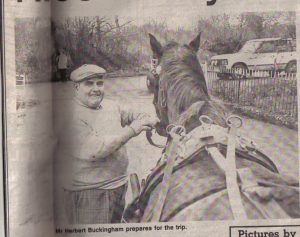 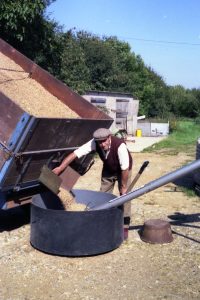 Four maps from the Scarning Apportionment document of 1846 which lists all the their field names. 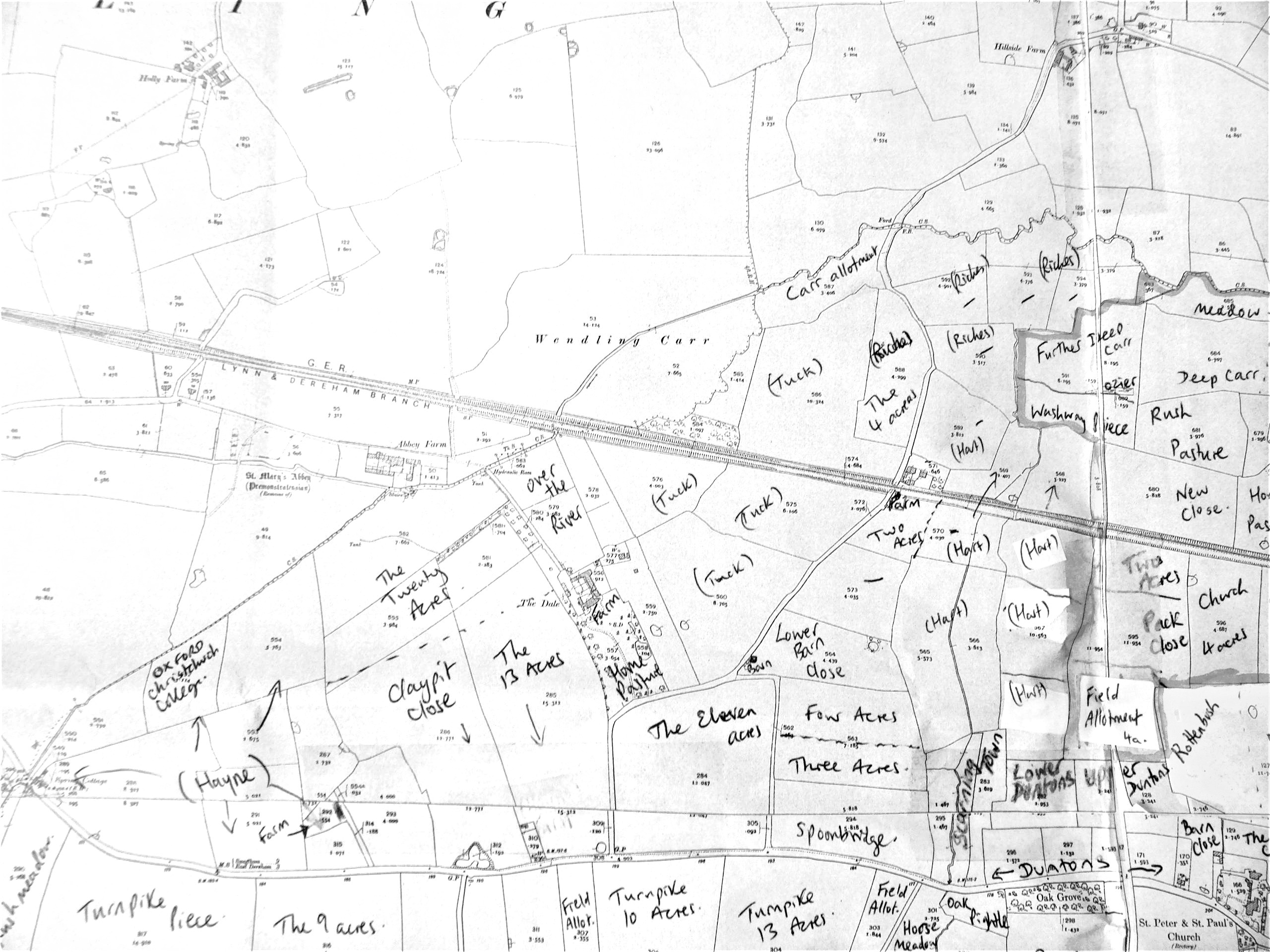 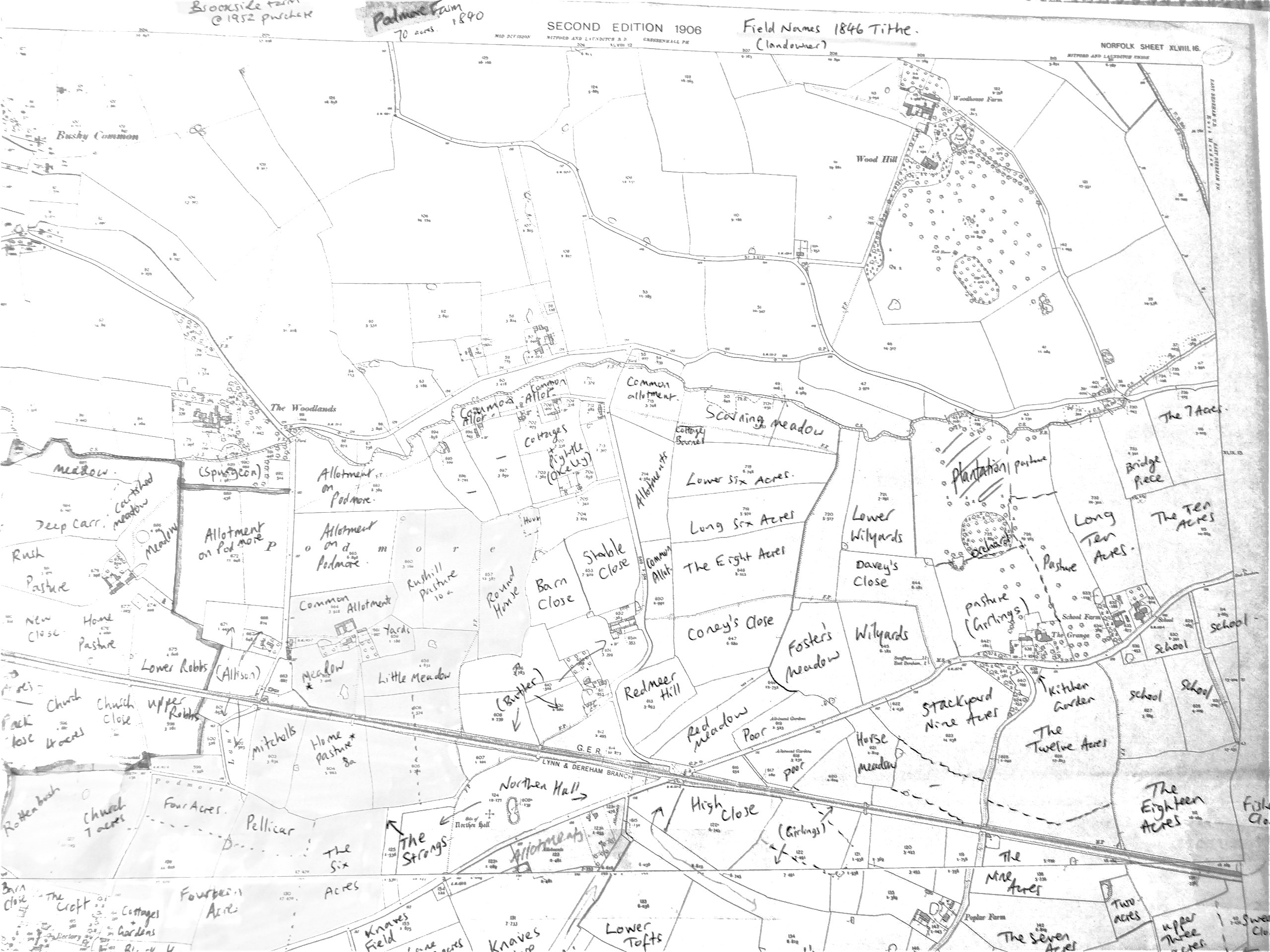 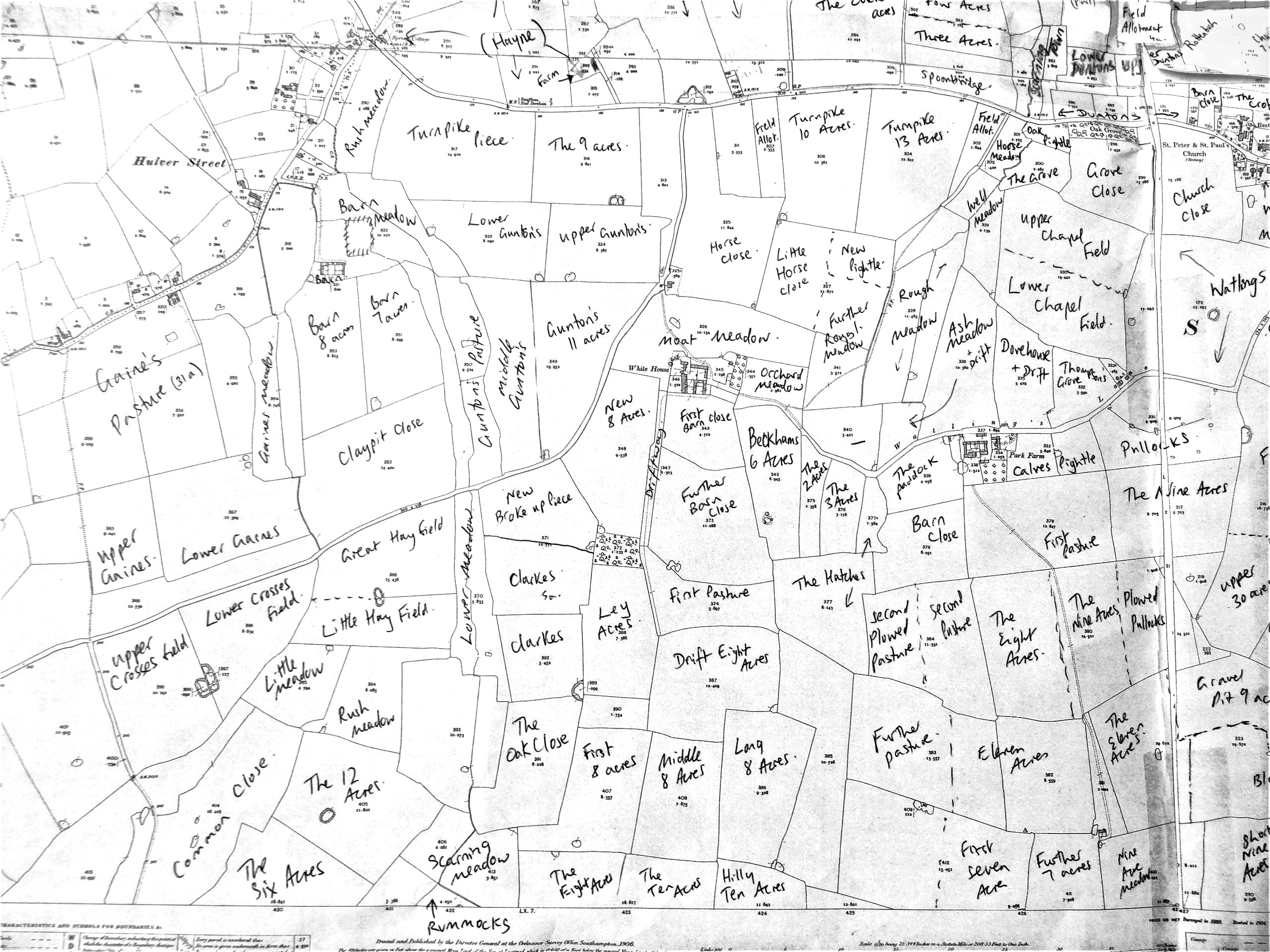 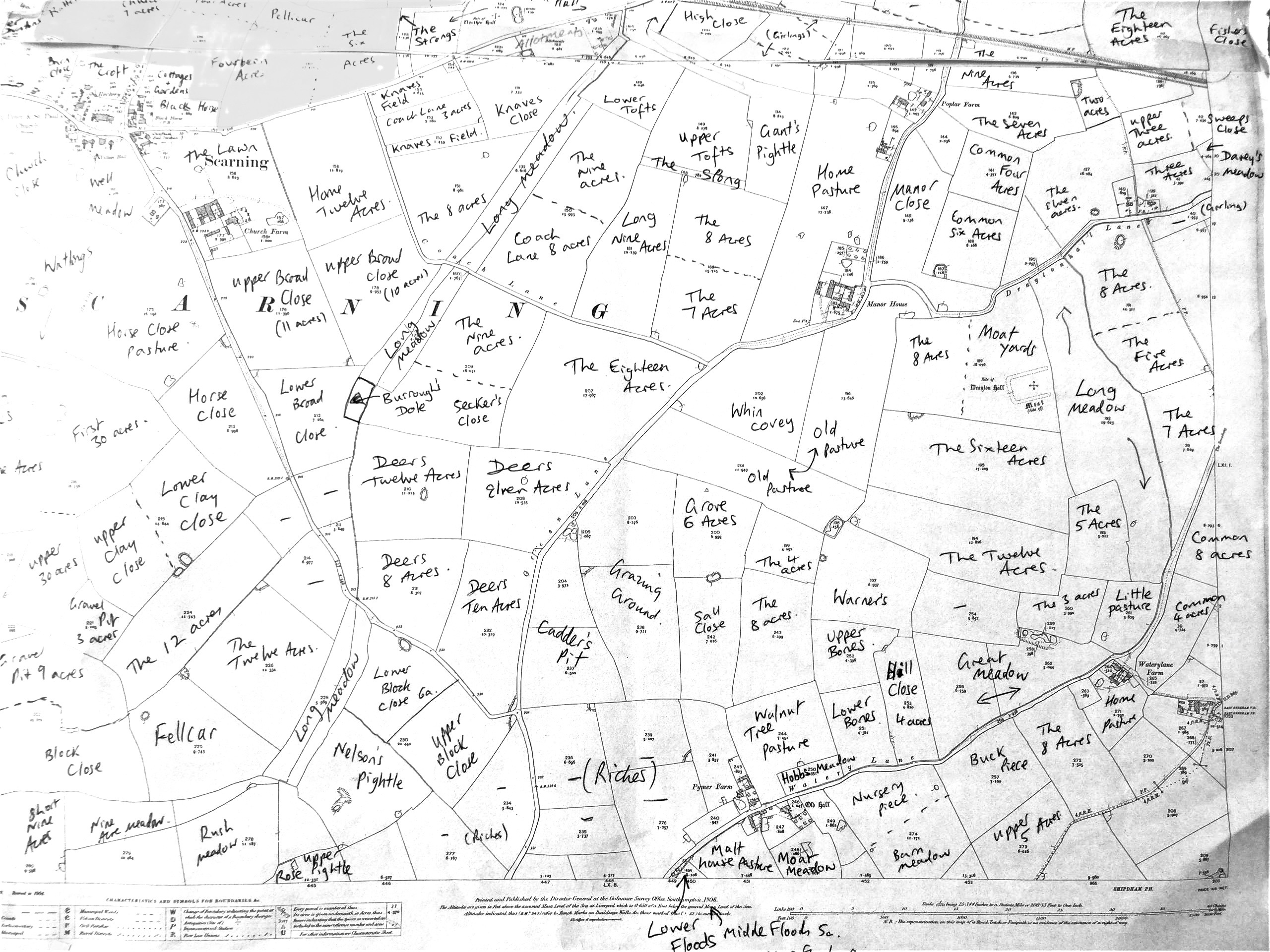 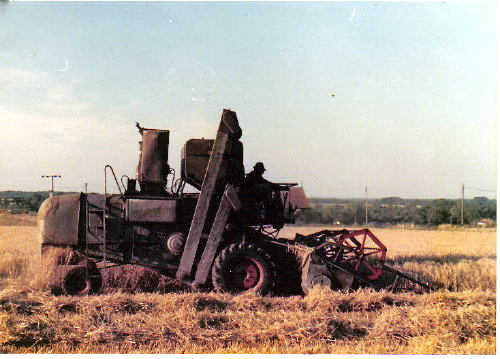 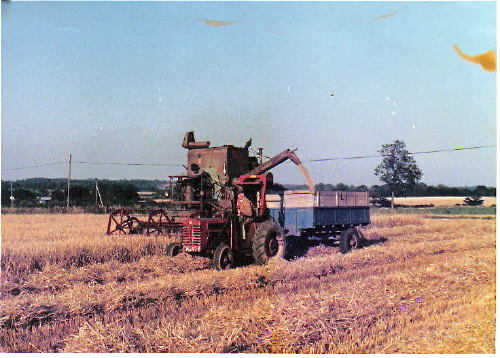 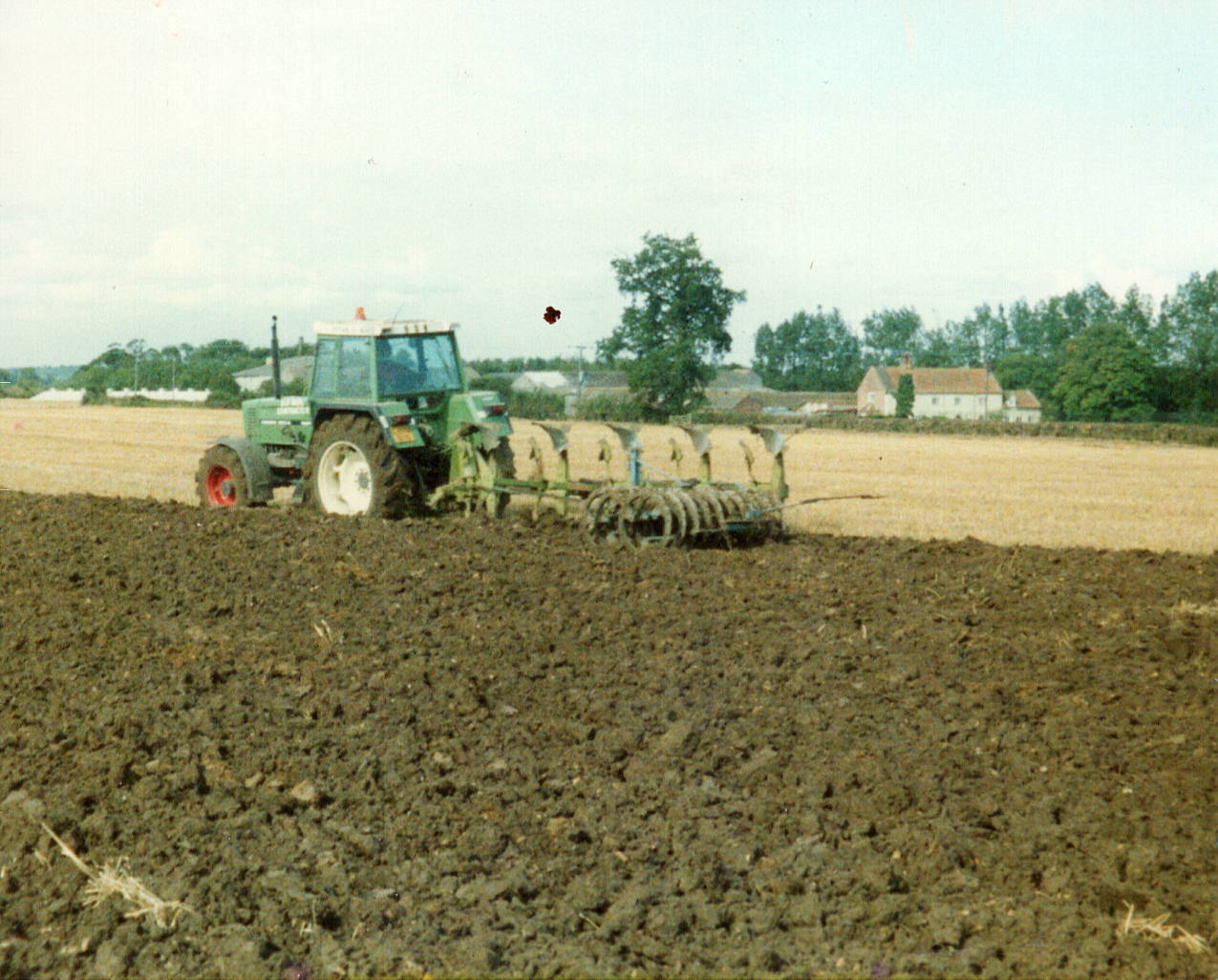 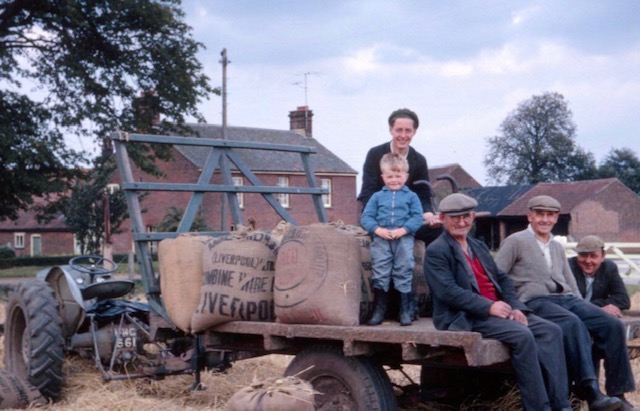 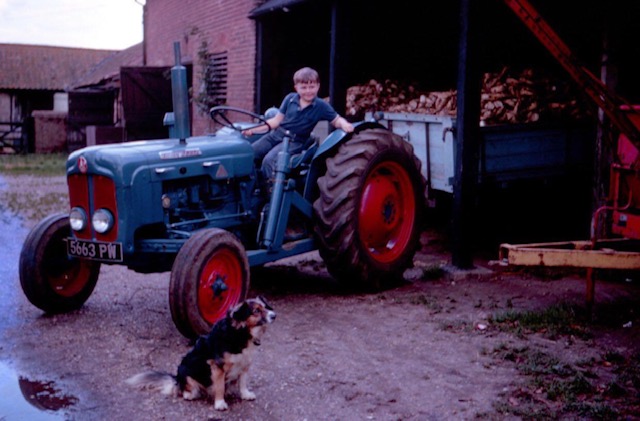 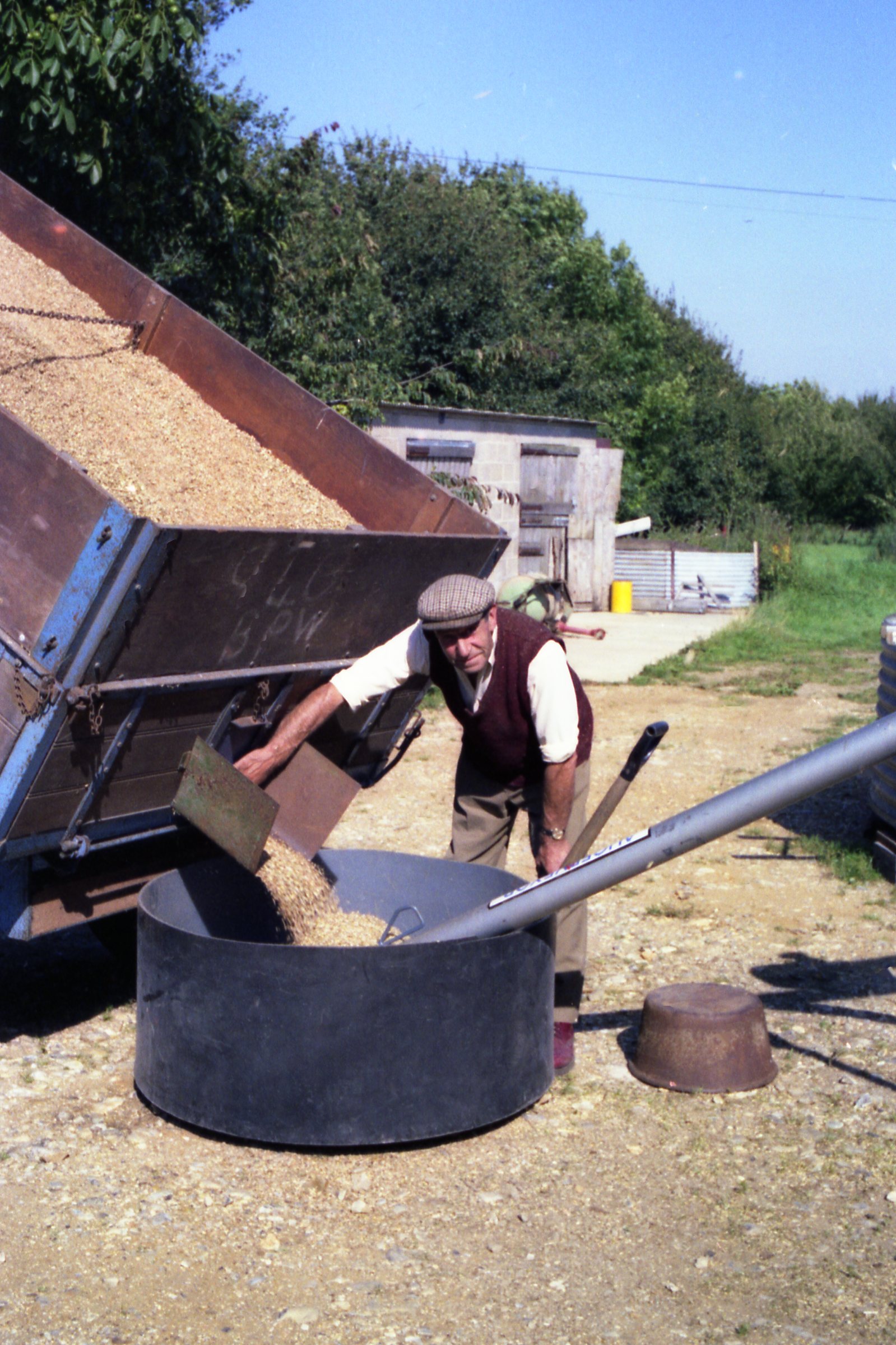 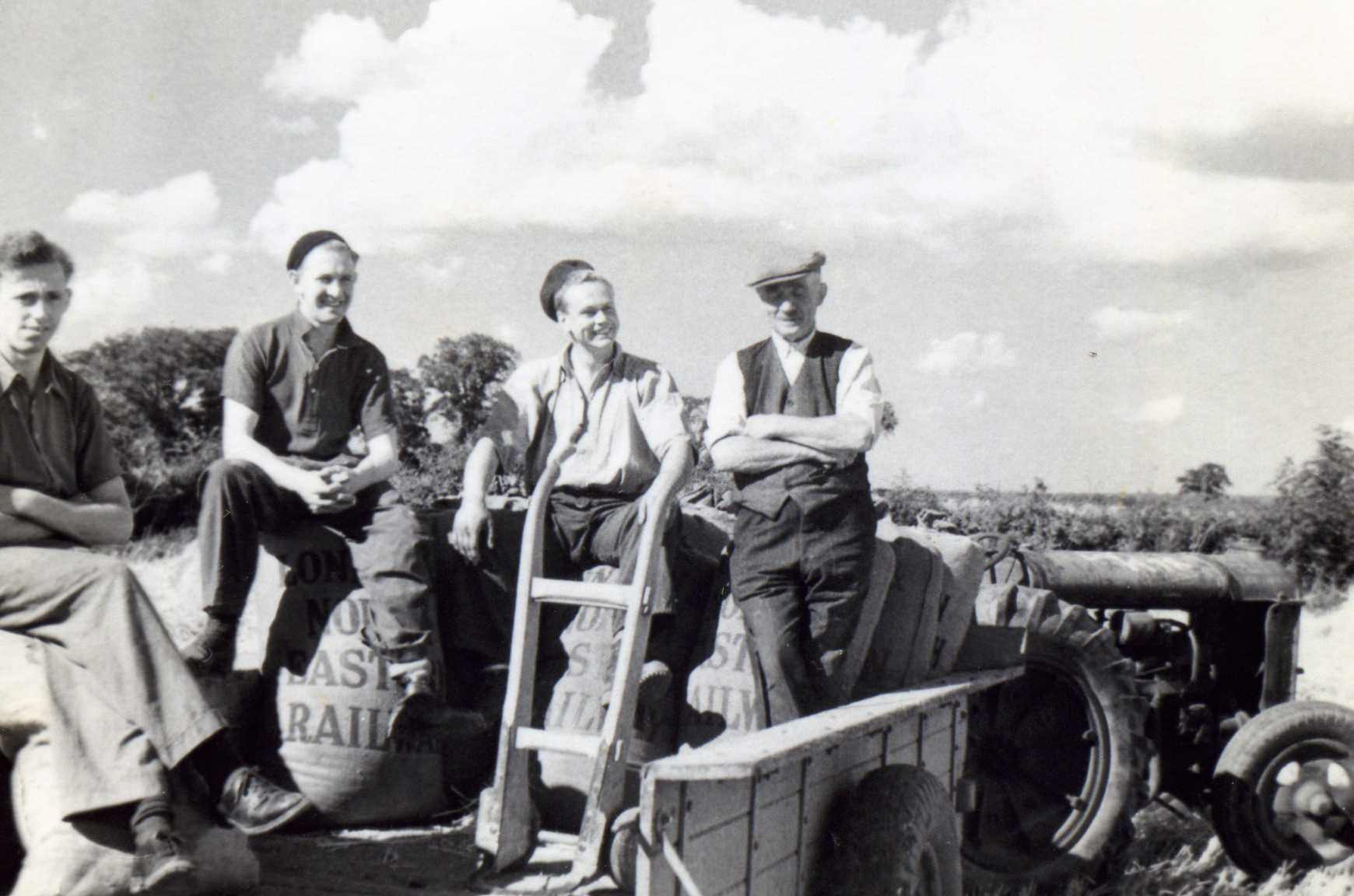 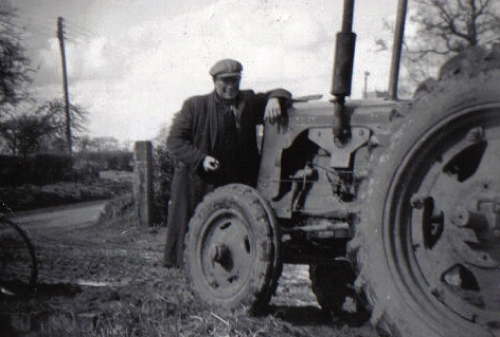 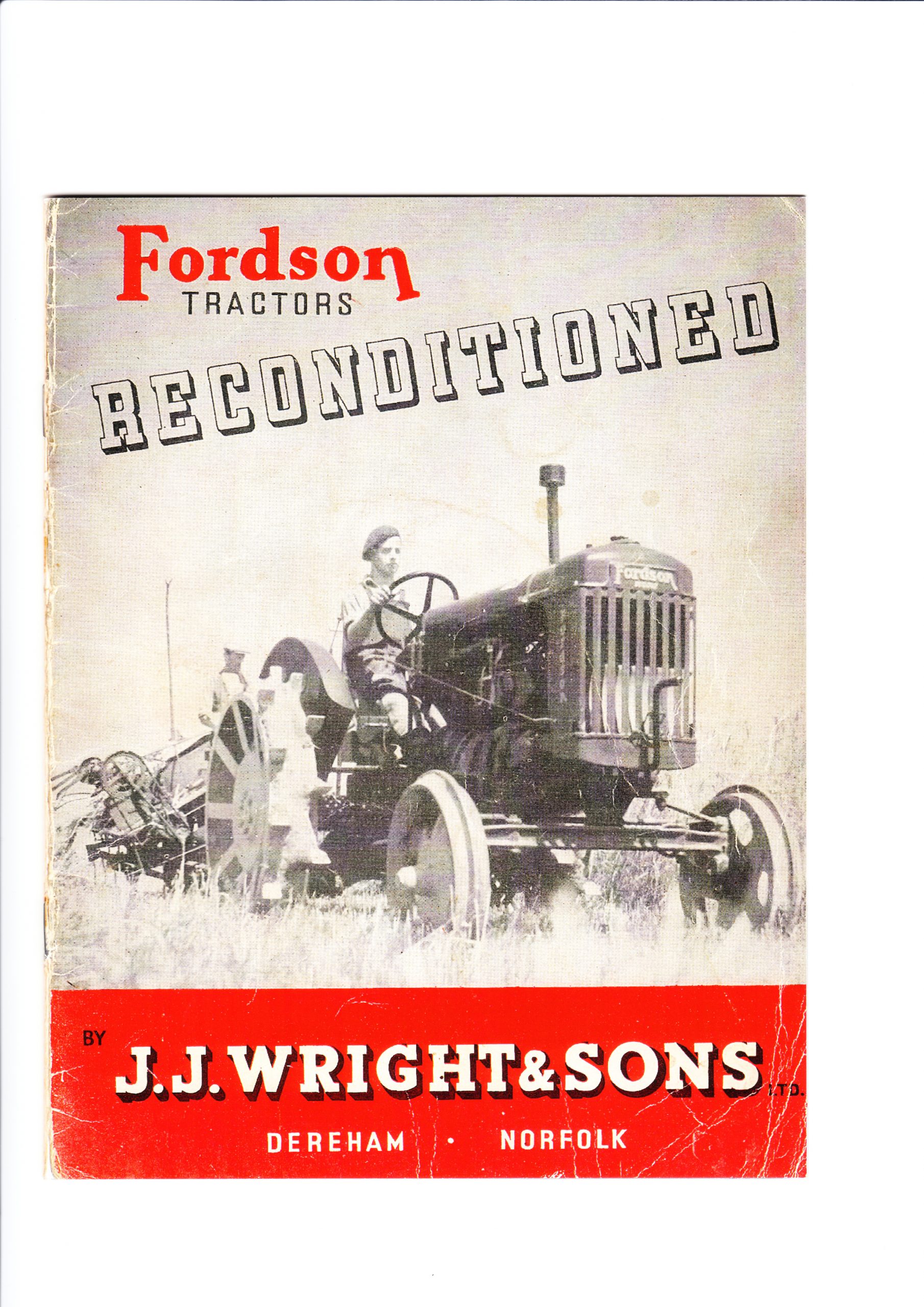 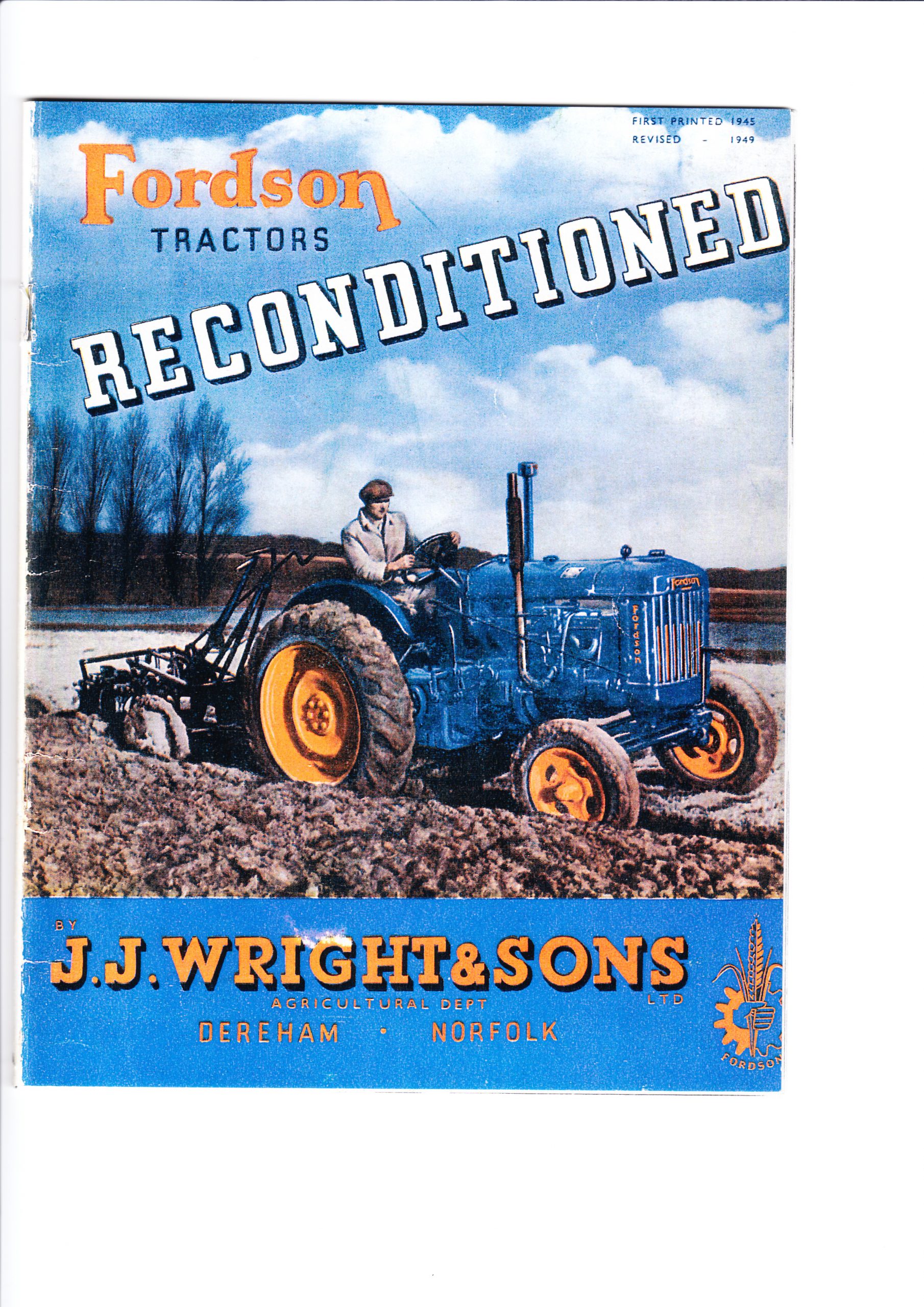 Front of revised 1949 Wright’s brochure with George Milk at the wheel of a Fordson Major at Dale Far, Scarning. 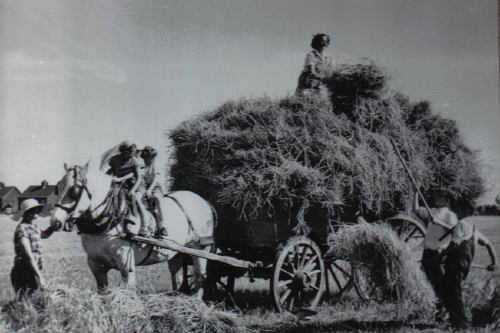 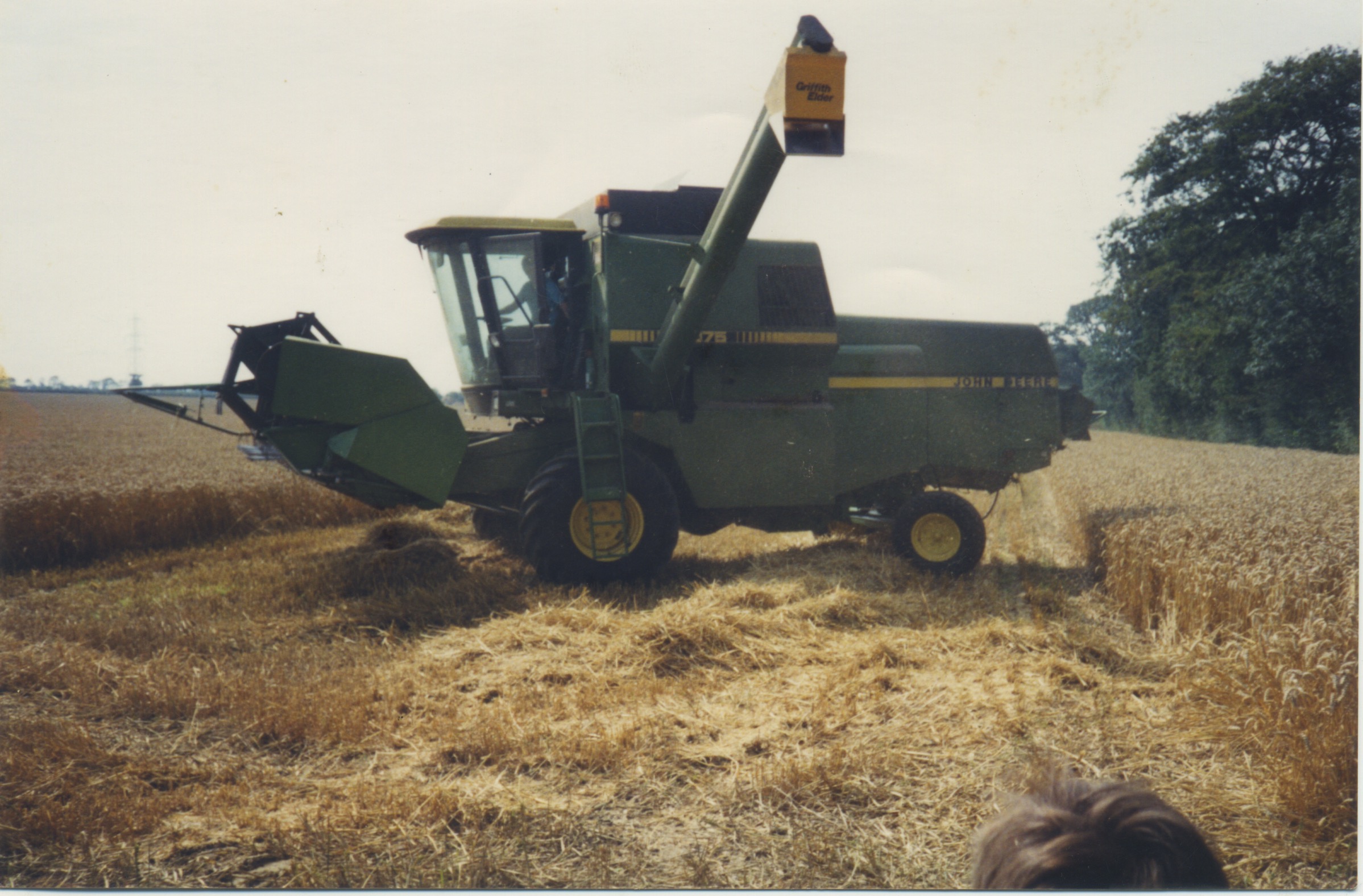 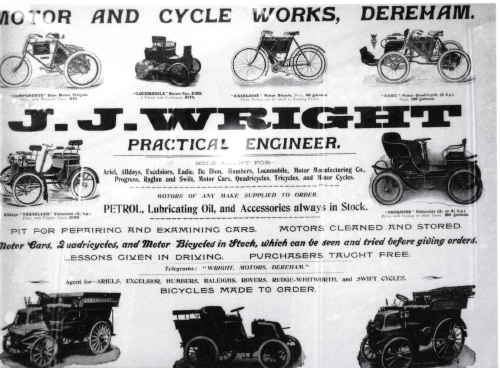 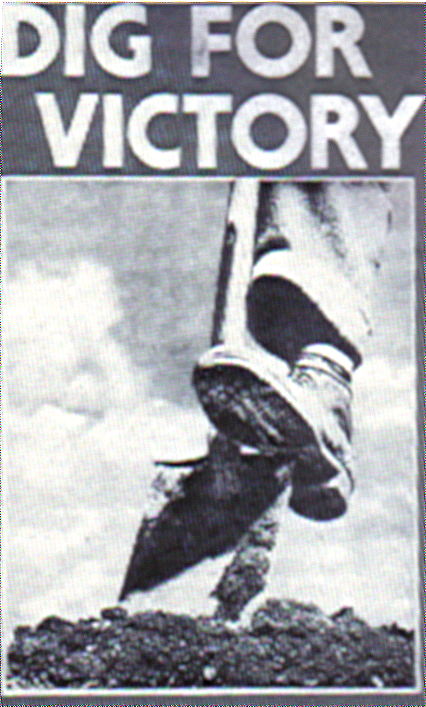 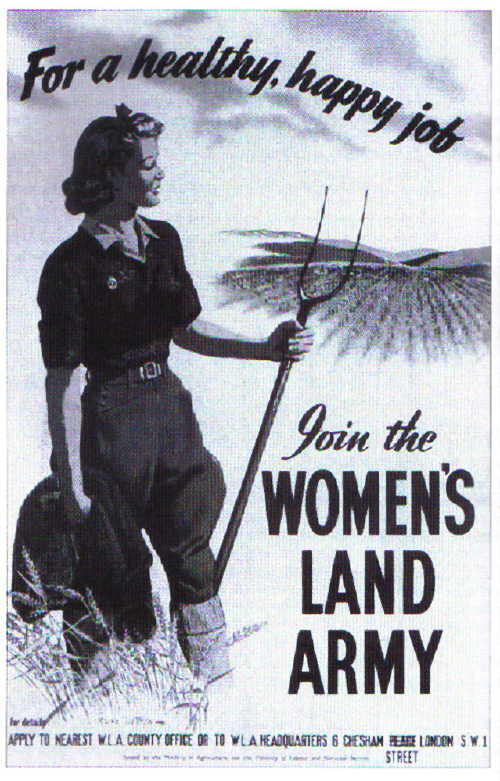 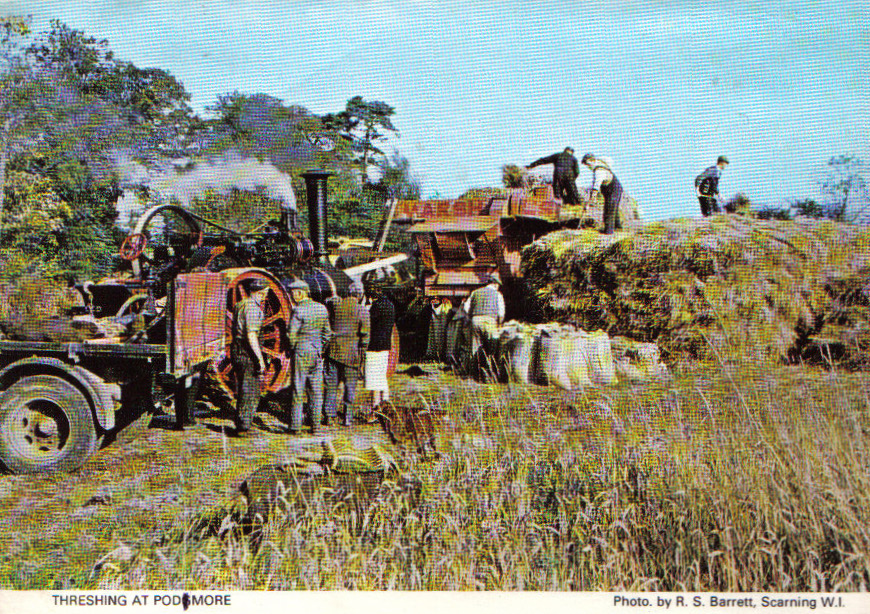 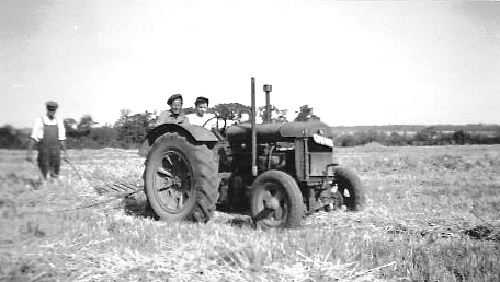 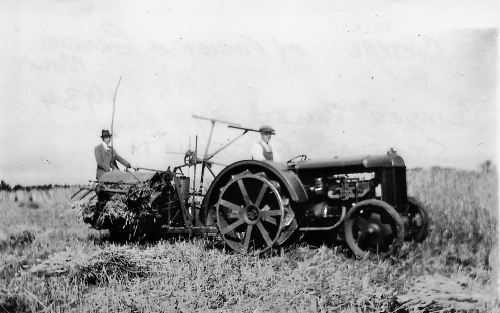 Farming in Scarning – 220 Years Ago

In compliance with your desire and my promise, I will endeavour to describe, as accurately as I can, the method I used in drilling the field of wheat which you saw, when you did me the honour of calling upon me at Scarning.
The field consists of about twelve acres, and is a mixed soil; last year it grew clover and ray-grass after barley, and as soon as the first crop of clover was reaped and the second crop fed with sheep and cows, I broke it up in order to temper it for wheat. It was ploughed twice and scuffled twice which with many harrowings brought it, by the beginning of October into a high state of pulverization; in this state I began my operation by using such a quantity as might be sufficient for two days work. The surface then being as flat as possible, I set out the work thus; in the middle of the field (which was fixed upon because no side of it was straight) I set two sticks, in order to draw a line as straight as possible to direct the drill. My drill is a small barrow with two hoppers or boxes, one on each side of the wheel, and is pushed forwards by a man. In the line thus formed by the sticks, the barrow was directed, depositing the seed from the hopper on the right side of the wheel upon the flat work. Immediately after the barrow, at the distance of about ten yards, followed a plough to cover up this line of seed, by turning the mould of a fleet furrow upon it; when the barrow, followed by the plough, had reached the end the man with the barrow turned towards the left hand, and at the distance of one yard from the line of seed already deposited, dropped from the barrow another line of seed parallel to the former; now a second plough followed him as before, whilst the first plough, which had covered the first line of seed, was Sacking its own furrow. The harrow-man, arrived at the end of the second line of seeds turned to the left as he had done before, and dropped a third line of seed one yard from the first and parallel to it and was followed by the first plough, whilst the second was tacking its own furrow. In this manner I worked, my barrow depositing lines of seed, at one-yard distance from each other, and my two ploughs alternately covering the lines of seed, and backing each its own furrow, till I had completed my morning’s work, at the end of which you will observe that except the work of the barrow, I had merely set out the tops of the four-furrow work of about two acres of land, and these remained the baulks to be split. This was the operation of the afternoon; for whilst my double barrow was directed upon a balk, depositing seed in the furrows from the two boxes on each side of the wheel, a double-breasted plough, drawn by two horses, split the baulk, covered the wheat so deposited, and completely made up the four-furrow work which had been set out in the morning. The next day I repeated the work precisely the same as the day before, by setting out fresh work from a line formed by two sticks, as at first set up across the field, in a direction parallel to the first line drawn, and at such a number of yards from the last line of seed dropped, as I thought would afford work for the day. Thus was the whole of the twelve acres laid into four-furrow work, with three rows of wheat upon every stitch, at the distance of nine inches between the rows, and eighteen inches for the furrows, with no more than five pecks of seed-corn per acre, and performed by three men, two ploughs, and four horses, in a morning, and two men, one plough, and two horses in an afternoon; and the whole two acres were finished in a day. I rolled it afterwards to please the eye, level the work, reduce the depth to which the seed was deposited, and afford mould in the furrows to support the wheat on the sides of them. As soon as the wheat came up I cleaned the furrows by a plough with expanding wings, drawn by one horse. In the spring I contrived to fix upon this plough two scarifiers, and taking off the expanding wings, I used it to hoe the furrows, and at the same time scarify two rows of wheat, one on each side of the furrow: afterwards I put on the expanding wings and substituting hoes for scarifiers, I by one operation of this plough hoed the furrows and two rows of wheat, and at the same time moulded them up; this operation was performed twice. “Thus, Sir, have I given you as clear an account as I am able, of the manner in which I drilled (if I may be allowed, the expression) the wheat you saw.
I am, Sir,  your obedient servant,