Although Drayton Hall no longer exists it lends its name to the road which bounds the estate of modern houses at the east end of the village. Several people have asked about the origin of Drayton Hall Lane and Fen Road.

The composite map, copied from 6 inch Ordnance Survey maps from the late 1840s, shows where the ruins were situated at that time. What is now known as Fen Road was once called Draytonhall Lane which continued northwards under the railway line and follows the current route alongside the housing estate. At the bend in Fen Road, there was a track through the Fen and the railway bridge at Cattle Arch Farm. The A47 diverges from the route of the railway line around the current junction with Drayton Hall lane and now runs south of the route of the railway line. The previously unnamed road past Poplar Farm (now Manor Road) also passed under the railway line. To the north of the A47, the road (now Grange  Road) continues towards Dereham Road which was the old turnpike road between Dereham and Swaffham.

“It is now agricultural land, but in the past it has been a golf course and for centuries was simply known as Drayton Hall.

Nowadays, as we exit the A47 at Draytonhall Lane, we are, in essence, stepping back in history, though perversely the hall itself stood on the opposite side of the road. Take a left off the A47 at Fen Road and sharp right, and before Manor Farm Riding School you will come to a field on the site of the old moated manor house of Drayton Hall. No traces of the hall remain, but its name is derived from the Drayton family, who also owned land outside Norwich and who gave their name to the village of Drayton.

Drayton Hall in Scarning was previously owned by, amongst others, the Heydon family, who made their money in sheep farming and built Baconsthorpe Castle in Norfolk, and married their daughters into the Boleyn and Paston families. At some point the manor of Drayton Hall was extended to include land near Scarning’s school and into Dillington. Its owners included the wealthy Repps family, many of whom can be found buried in the church, as well as Sir John Lombe, who started life as plain John Hase before changing his name so that he could inherit the great Lombe family fortune and with it Great Melton Hall.

Hase attended the school in Scarning and afterwards went on the Grand Tour to Italy, sitting for his portrait in Rome to Pompeo Batoni, the go to artist for the aristocracy. Hase’s father had been a hatter in Dereham, but the death of several family members elevated him into staggering wealth. His brother, Edward, was also at Scarning School and later put his share of the family fortune into the construction of his home, Salle Park.*

Another owner of the manor of Drayton Hall was John Conyers, who as a young man travelled to Sienna, Florence and Rome. In later years, he was a founding governor of Thomas Coram’s Foundling Hospital, and one of his uncles was Deputy Governor of the Bank of England.

In the meantime, Drayton Hall fell into disuse, but in 1902 the land around it was transformed into the nine hole Manor House Golf Club. That same year, Scarning’s Village was opened and a new cycling club in the village was started.

‘Is there no game or amusement from which Scarning residents are debarred?’ the village’s rector questioned in the new village magazine.

Draytonhall Lane is now a cut through to the old Dereham Road, as well as access to the estate, but its name carries an illustrious history and is another part of Scarning’s long and intensely varied past.

* More about the school and its pupils can be found in Arcadia: A History of Scarning Free School, a copy of which is available in Dereham Library. 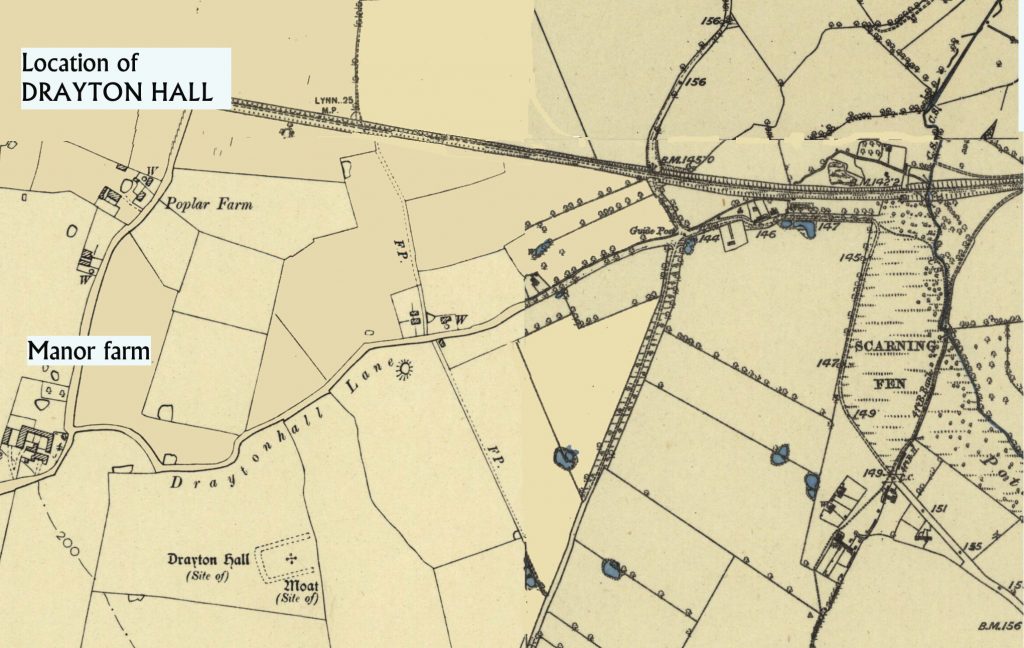 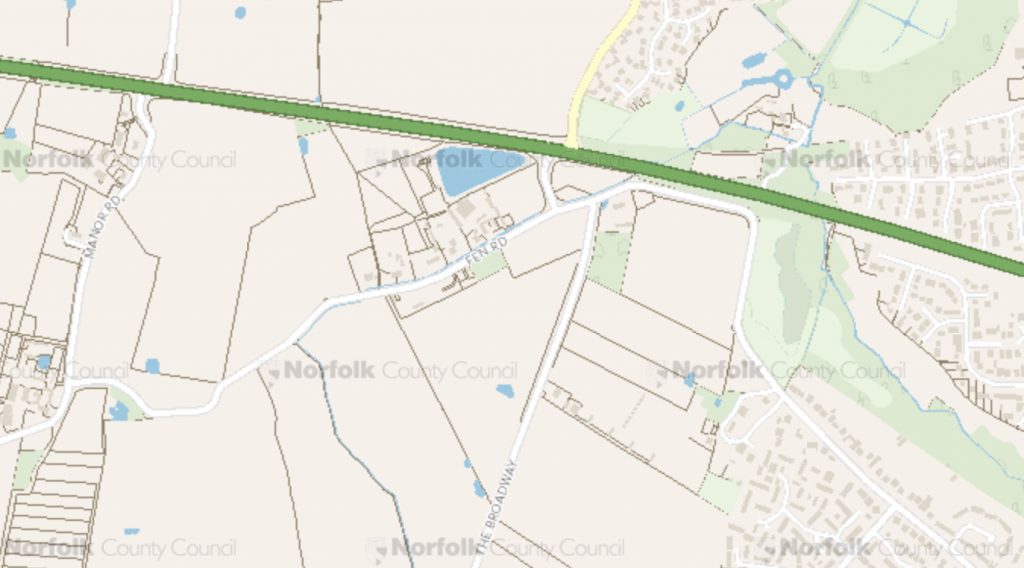 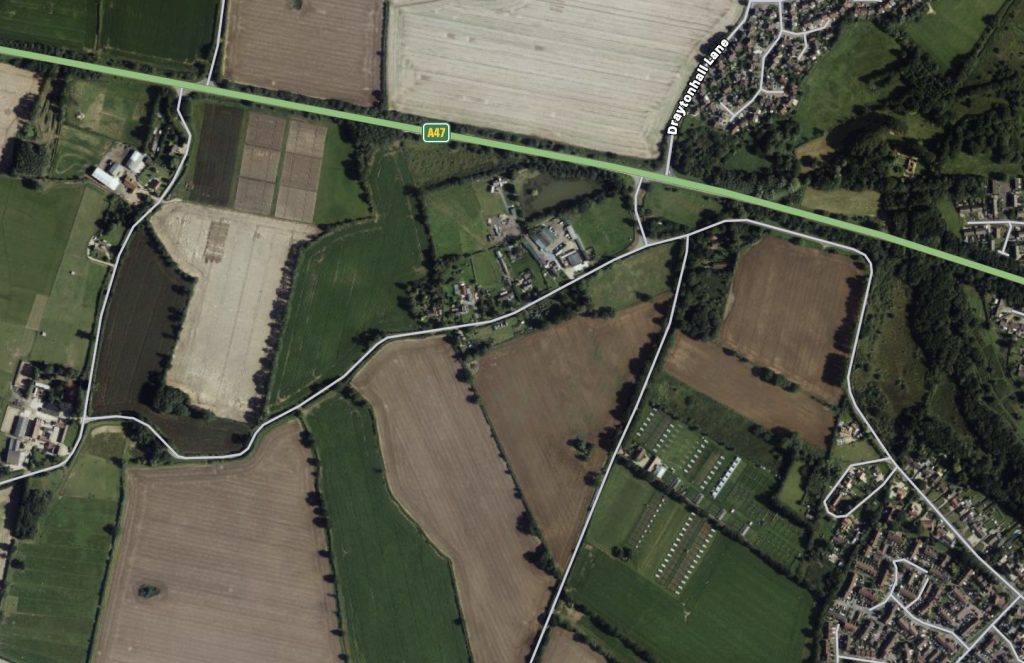 The following is from British History Online. Conyers at the end of this piece was connected to the school as were the Repps and R W Warner.

“Agnes, one of the daughters and coheirs of Will. de Drayton, had by a fine (in the 14th of Henry III.) this lordship which the services and homage of Thomas, son of Baldwyn, being the fourth part of a fee settled on her and William Lanveisey her husband, held of the Marshals, lords of the barony of Rhye. Alice, the other daughter and coheir, married Jervace de Bradfield, and afterwards William de Bellomont. Godfrey or Geoffrey de Bellomonte, or Beaumont, his son, claimed the assize of bread and beer of his tenants, the lete and view of frank pledge, with the view of the King’s bailiff of the honour of Hokering, in the 15th of Edward I. and in the 21st of that King, John de Beaumont had a charter for free warren in his demean lands in this town, East Derham, Drayton, Taverham, &c.; he was brother of Godfrey who died about this time; and it appears that Godfrey had married Cecilia de Ferrarijs, and died without issue, but some records call her Alianore.
In a court of this manor held in the 3d year of Edward III. the jury swear that William de Bellomonte, late lord, granted to Roger de Beston of Scarning, that he might common with his cattle (averijs) any where in the common pasture in Scarning, called Toftwood hill, for a certain messuage situate in Brendwode.

In the 39th of Edward III. William Catts was lord, and paid 3s. 9d. per ann. on the feast of Holy Cross, in May, to the Lord Morley, lord of Hokering, and to the lord of the hundred 2s. lete fee, 22d. moterent, and suit of court to the hundred at Easter and St. Michael; and in the 13th of Henry VII. Sir Henry Heydon conveyed it to William Bardwell, junior, Esq. in exchange for the manor of Wit chingham, in Salthouse and Kelling, on September 8, and Robert Bardwell, Esq. son and heir of William, was lord in the 3d of Henry VIII.

On the 4th of March in the 4th of Henry VIII. Sir Robert Southwell sold to William Wotton, all his right in the wardship, custody, and marriage of Elizabeth, daughter and heir of Robert Bardwell, Esq. by virtue of a grant to him from Sir Edward Howard, held of the said Edward, in right of the lady Morley his wife: and John Wotton of North Tudenham, Esq. who married the said Elizabeth Bardwell, died seized of it November 14, in the 37th of the aforesaid King: about this time it appears that there belonged to it 200 acres of land, 40 of meadow, 200 of pasture, 60 of wood, 200 of moor, and 6l. rent per ann. in this town and Dillington.

Anne, the only daughter and heir of John Wotton and Elizabeth his wife, married first Sir Thomas Woodhouse, of Waxham, secondly Henry Repps, Esq. by whom she had no issue; and about 1555, she married Bassingbourn Gawdy, Esq. second son of Thomas Gawdy, serjeant at law, and Thomas Hoo, Esq. resigned to him and Anne his wife, all his right in 26s. 8d. rent in the 3d of Elizabeth, issuing out of this lordship payable to that of Northern hall, &c. Bassingbourn Gawdy, Esq. son and heir of Sir Bassingbourn and his lady Anne, kept his first court here in the 13th of the said Queen.

In the 15th of James I. there was a præcipe for John Boldero, Gent. to deliver it to Eustace Darcy, Esq. and Thomas Godbould.

Afterwards, it was possessed by the Repps of Mattishale, and by Richard Warner, Esq. who died seized of it in 1757, and by his daughter and coheir is brought to —Conyers, Esq.

Concealed lands and a close called Games granted to Edmund Dyer and Henry Cressener in fee farm, in the 16th of Elizabeth.”