NorfolkPubs.Co.UK  has detailed lists of the publicans who ran our four pubs. The website also includes one or two anecdotes, including the following about the Black Horse in 1888 – when harvest work was thirsty work, and beer was safer to drink than water! “William Tuck applied on 31st August 1888 for an early morning, one hour extension to his licence. He requested that he be allowed to open at 5:00am instead of 6:00am so that harvest workers could get their beer fresh in the morning rather than have it bottled up the previous night. Application approved for the month of September only.”

In the 19th century, there were four public houses in Scarning. The oldest was the Black Horse. In 1848, when the railway was opened, it was run by Susan Tuck, who had done so well for herself that she owned three rented cottages near the church and six acres of land near the pub, some of which is now Black Horse Close. The Black Horse had stables and yard at the back. In 1869, Susan son, William Barkham Tuck, was running it. William Tuck by then was in his late 40s, married, with two children. He was a coachmaker by profession and probably with the decline in trade that followed the construction of the railway, by necessity. He certainly does not seem to have devoted himself entirely to running the Black horse, but kept up his trade as a coachmaker. He was also the assessor and collector of taxes for the village, assistant overseer of the poor and collector of the poor rate.

There were two types of public house. The coaching inns, like the Black Horse, were frequented by the farmers, dealers, tradesmen and craftsman. The beer houses, or “hedge alehouses”, by contrast, catered for a lower class of customer and were often no more than converted cottages in which labourers could drink and talk out of sight of the masters. In 1854, White’s listed the names of three beer sellers in the village, Robert Haines, George Cross and William Took. Took run a beerhouse, but also work as a tailor. George Cross similarly doubled as a carpenter. 10 years later Cross who was born in Scarning in 1786, was described as a “joiner and victualler”. His establishment at Cooper Terrace by then was known not simply as a beerhouse but as the Joiners Arms. The Joiners would like to be known as the Compasses, the Three Compasses and finally the Carpenters Arms.

The long road, which passed through the village like a misshapen spine, gave ample scope to its beer sellers. In 1806, what would later become the New Inn, near the school and the adjacent road cottages were owned by Walter Christmas and the wife of Rev Levi Walton, who in 1819 became Master of Seckar’s School, having served as one of its ushers. One of the cottages is believed to have been occupied by a schoolmaster, perhaps Walton, or one of his own ushers. In the mid 19th century, Henry Jude ran the New Inn, but by 1869 it was in the hands of Robert Hammond, who married Sarah Jude and took over management of the house. In 1869, Hammond was thirty-seven. In 1877, the New Inn and the adjacent row of cottages were bought by the Norwich brewers, Fred and Henry Bullard, for £575.

The 4th public house in the village was the Spring Cottage near Hulver Street on the parish boundary with Wendling. Although not named in the Victorian trade directories, the tithe map of 1846 clearly shows a property on the site and the accompanying tithe book describes it as a “public house and garden”. In 1846, the property was occupied and owned by James Haines. Haines died in April 1868 at the age of 60. In 1854, Robert Haines was listed as running a beerhouse in Scarning. A nearby farmhouse, owned by the Haines family was later demolished. 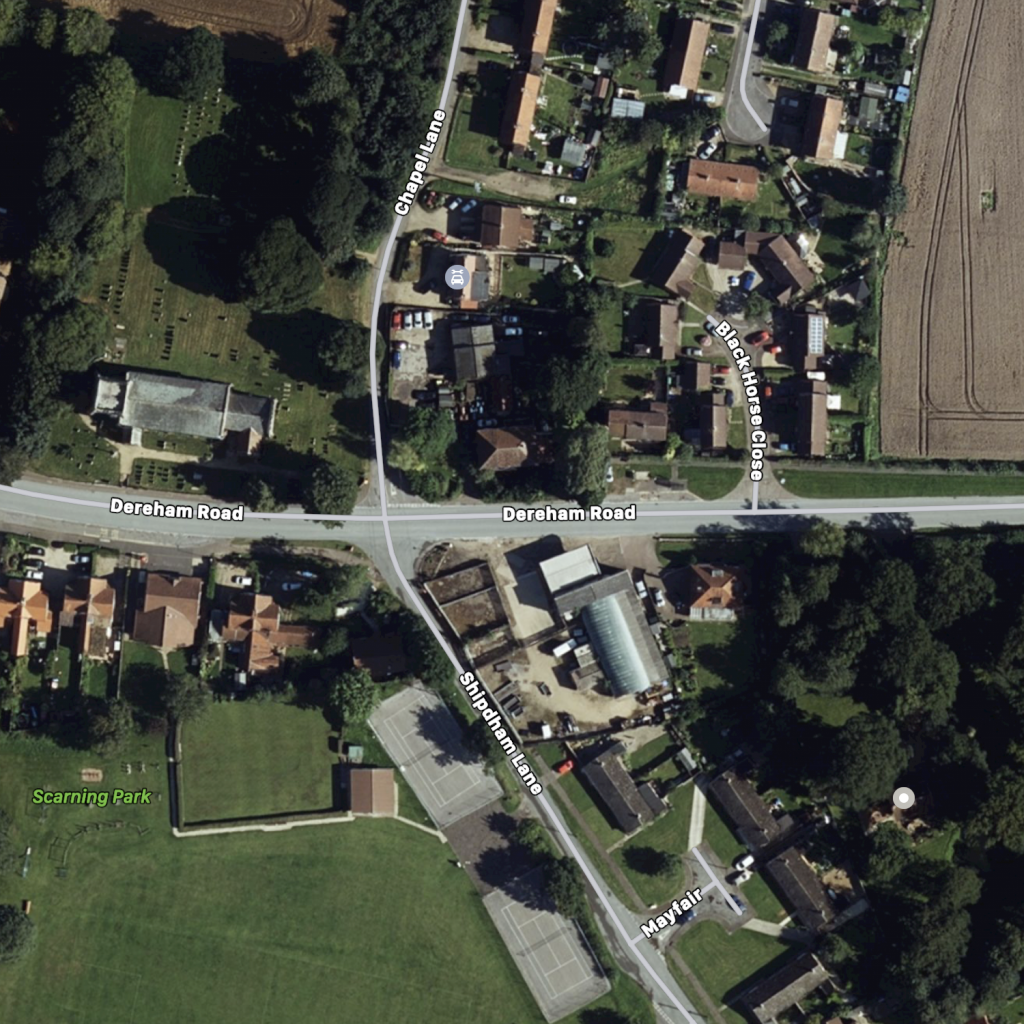 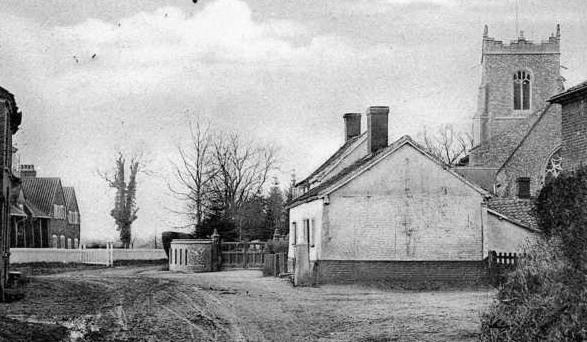 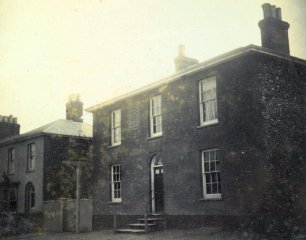 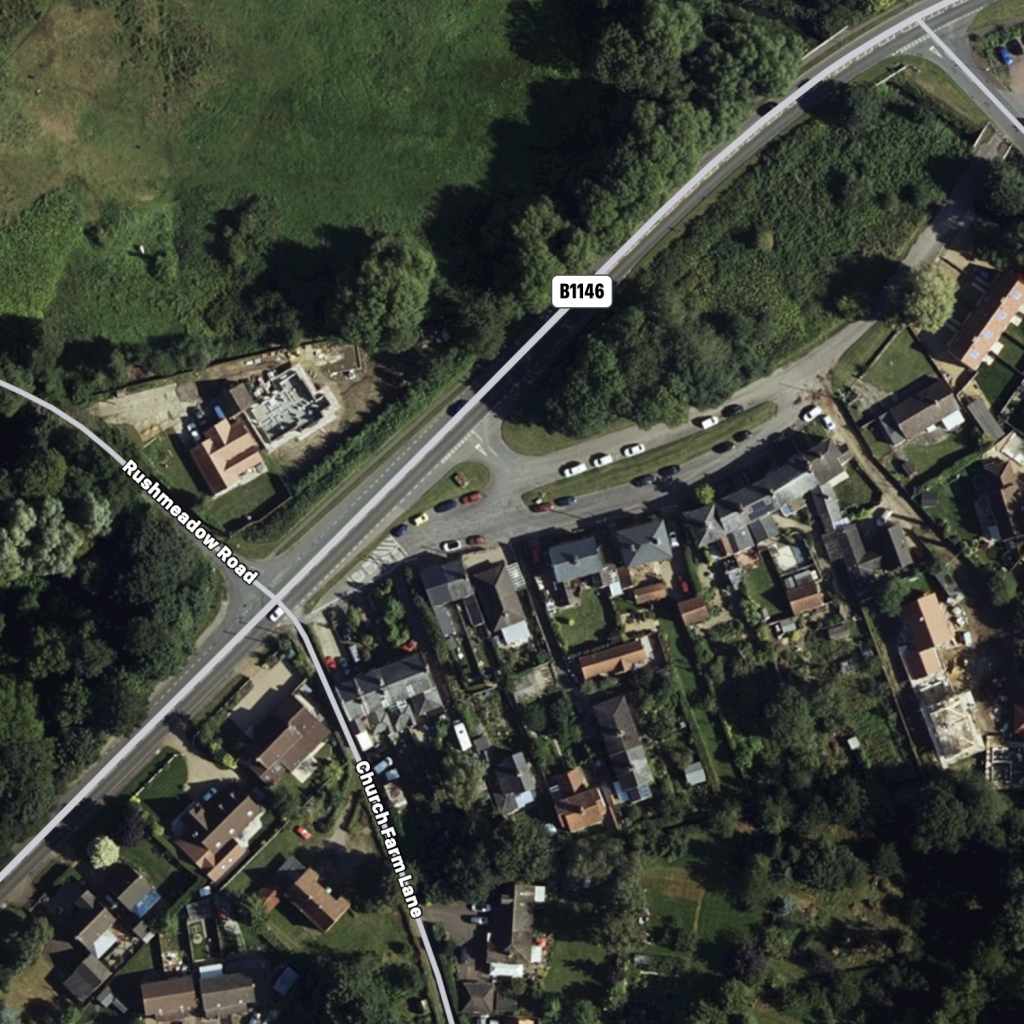 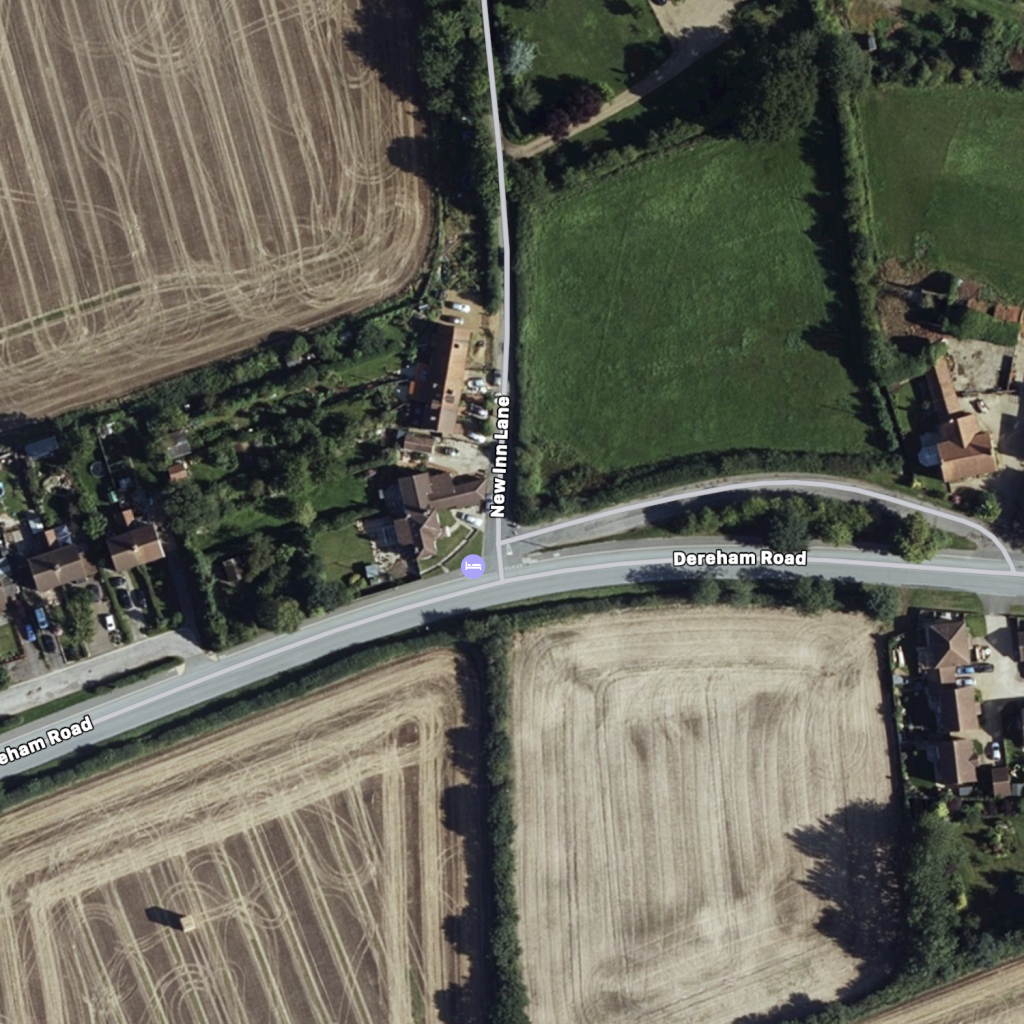 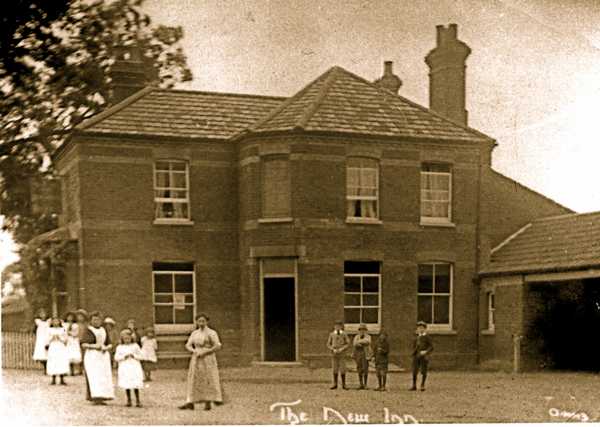 The “The New Inn” at the corner of New Inn Lane and Dereham Road in about 1920. It ceased to be a Public House in 1934. The premises were then converted into the “Corner House Cafe” to serve motorists on what was then the main road to Norwich and Yarmouth. This is now a private residence, see below. Perhaps some of the people in this picture are part of the Taylor family. Henry Herbert 49 was the publican in 1911, Minnie Matilda 44, his wife had 14 children 9 of whom survived and six were at home at the time of the 1911Census:- Charles Robert 22, Joseph Ernest 18, Ellie May 16, Herbert John 15, Edith Maud 14, Kindred Rose 12. 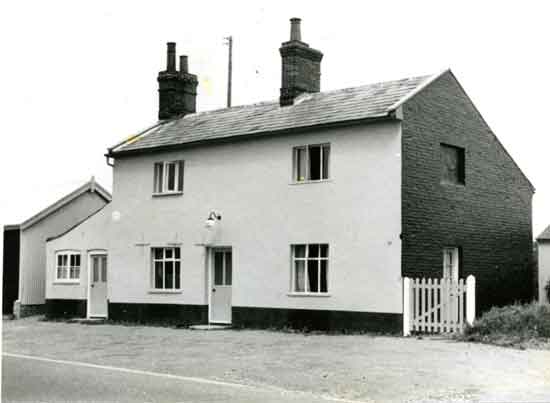 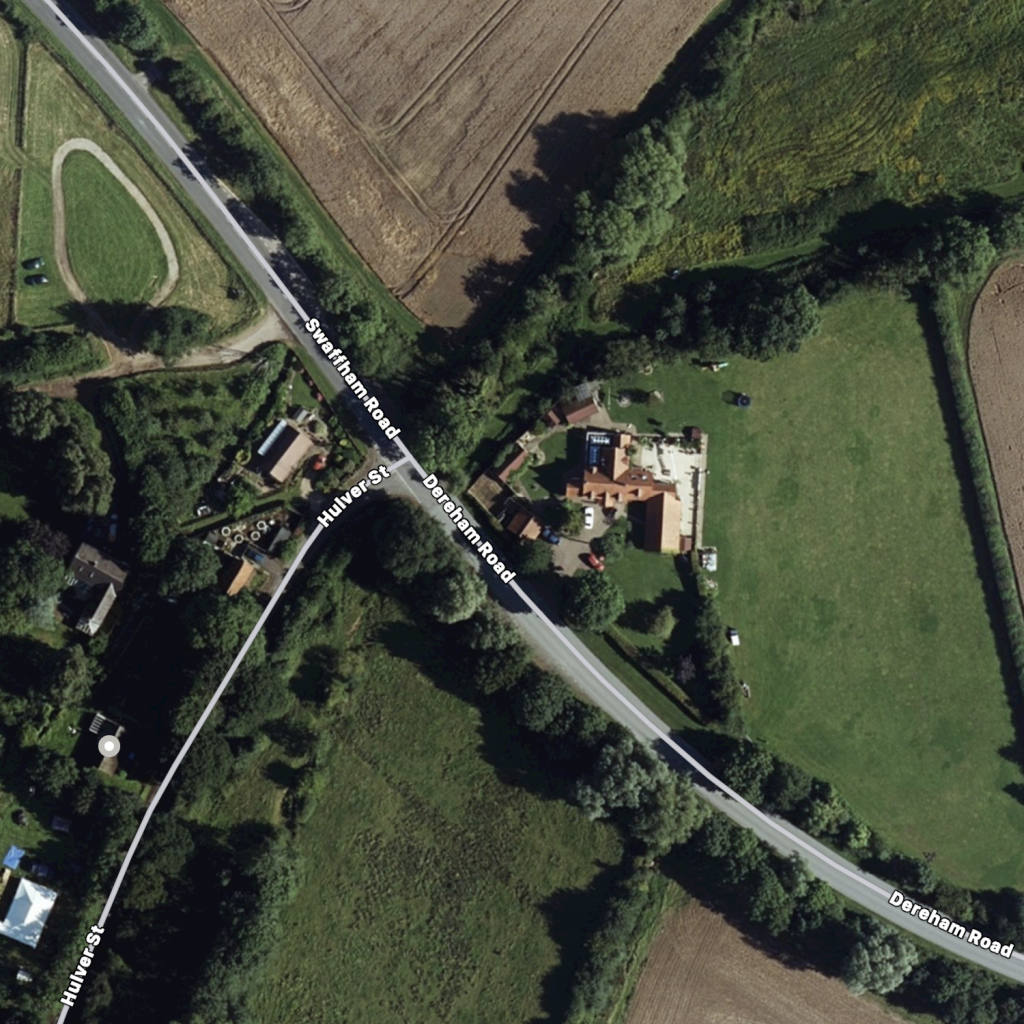 The following are articles from the Scarning Beacon by Tim Farnham, discussing each pub. Click on an image to expand the articles, and right-click if you wish to download the image. 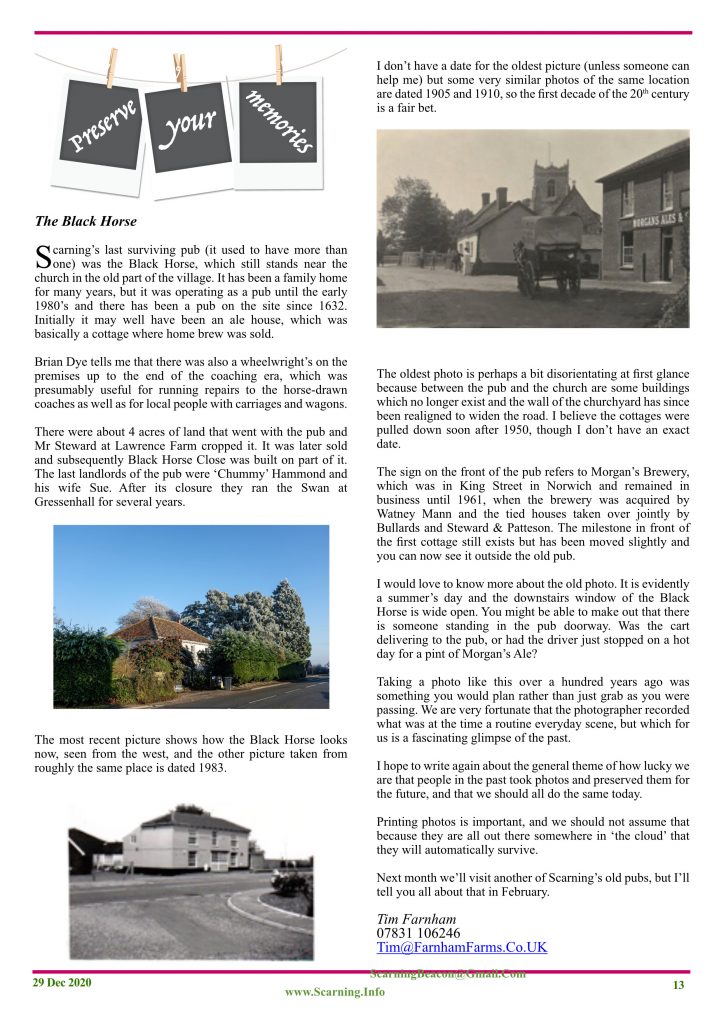 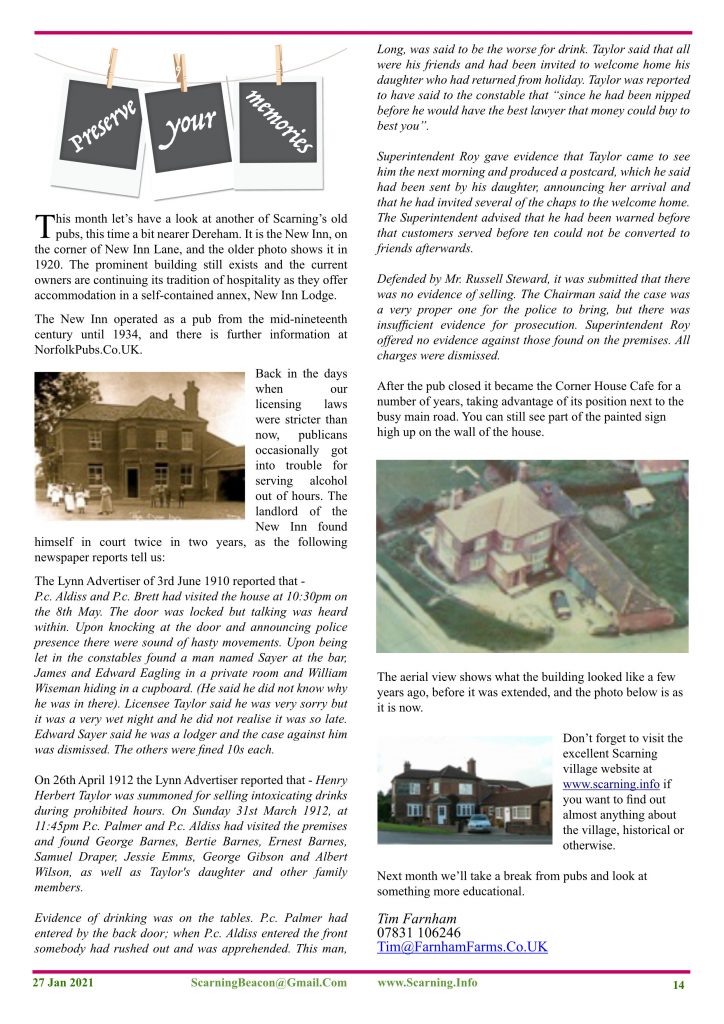 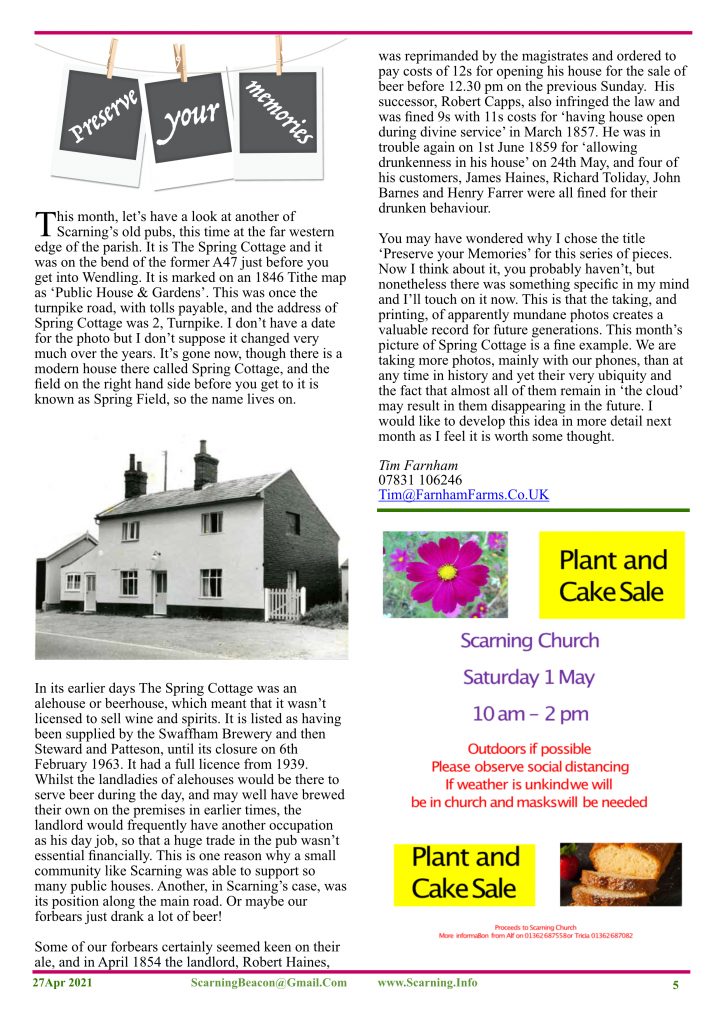 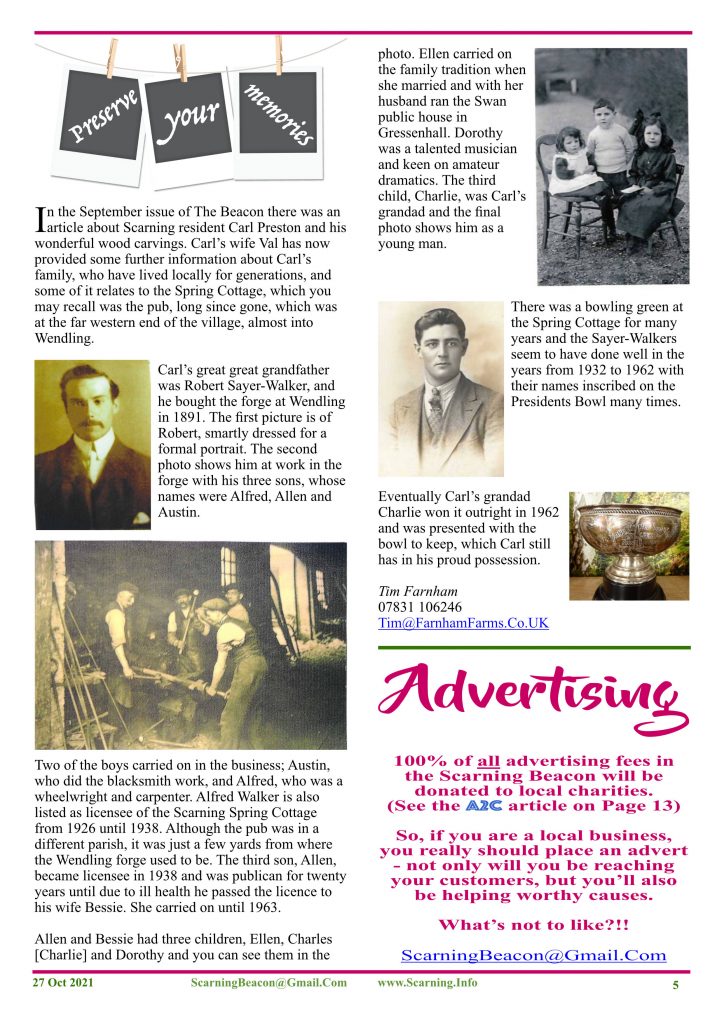 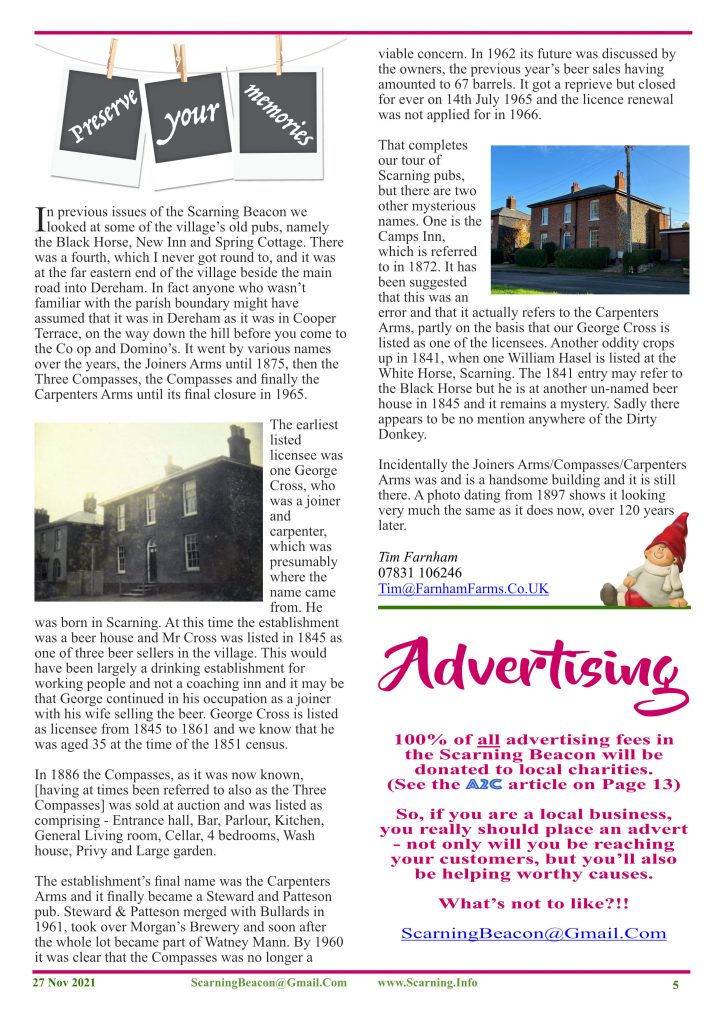