The railway line opened on 11th September 1848. The railway line cut across many farmers’ fields – George Hart, Thomas Neave, Robert Allison, Edward Press, Edward Lombe and Rev William Girling included. The farmers were forced to supply horses and carts for the railway “navvies” (navigation workers) to transport the materials to construct the line and the various crossings. There were three crossings in Scarning – Cordy’s Crossing (where Gatehouse Farm currently is); Podmore Crossing (where Chapel lane currently is) and a third at the Manor Road/Grange Road junction on the A47. Each crossing had a small stout house built alongside to house the gatekeeper and his family. Two bridges were also constructed – a wrought iron bridge near to Podmore Lane, which was been replaced in 1978 with the building of the A47 bypass; and another known as Fen Bridge, which is now known as Cattle Arch bridge, to the east of Draytonhall Lane.

There was also a shortlived Scarning Station from 1848, although it doesn’t appear in the Bradshaw timetables until March 1849.  It does appear in Topham’s timetable in October 1848 but is listed as “Scurning”. It last appeared in Bradshaw in October 1850 so it had a very short life indeed, presumably due to the close proximity of Dereham and Wendling stations on either side of our village.

During the 11 Plus era, boy pupils used to catch a train from Dereham, to attend Hamonds Grammar school in Swaffham, whilst girls from Swaffham headed in the other direction to attend the Girl’s High School in Dereham. The line itself closed in 1968. There is more information about the line on Wikipedia.

This 1859 OS map that shows Scarning station and also one in Dereham which was where Lynn Guest House now stands. It also shows an area called “New Scarning Common”, where today’s “New Scarning” exists. 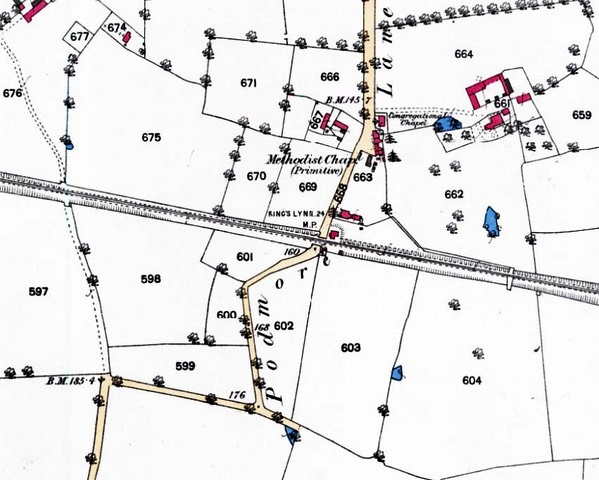 This 1884 OS map that clearly shows the gatehouse and also the location of the two chapels which preceded it that which were erected in 1883. 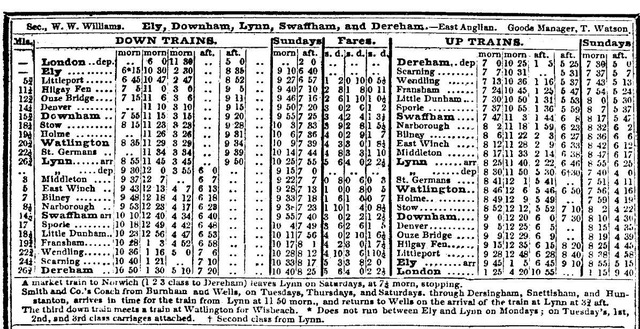 Timetable showing Scarning station. The train took 1 hour 18 minutes to get to Kings Lynn from Scarning. Today the XL bus could get you there in 1 hour and 3 minutes. 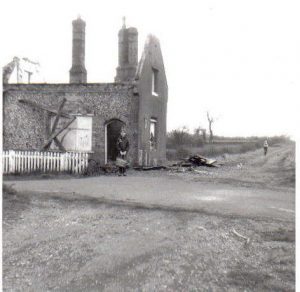 Podmore Crossing gatehouse next to Yew Tree House in Chapel Lane during December 1975, showing the track of the old railway, which is now the A47. 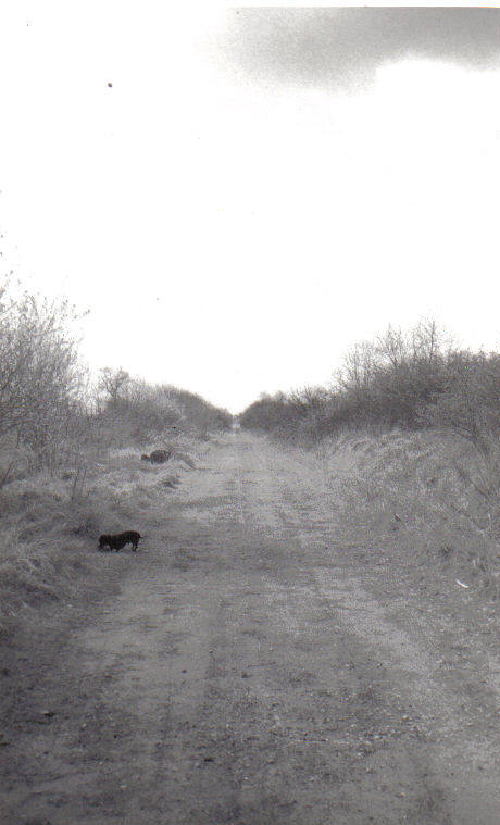 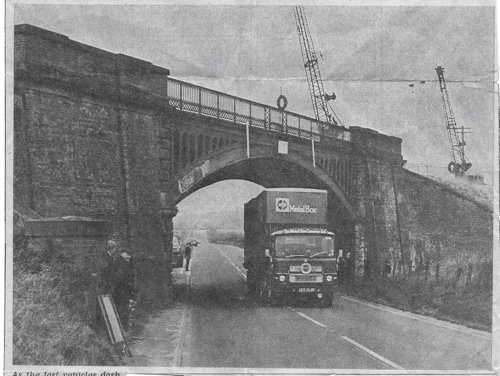 The last vehicle through the old railway bridge, and the last train over the bridge, before its replacement in 1978 during the construction of the A47 bypass. See below for two excellent videos of this bridge being dismantled. 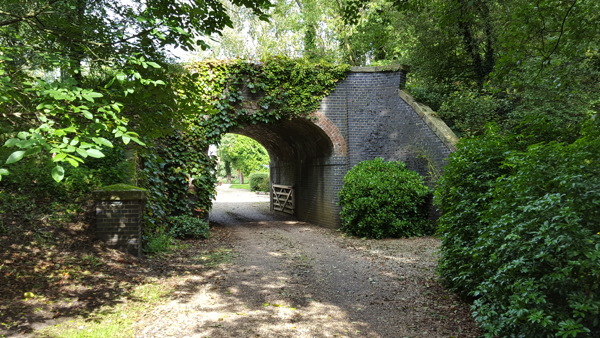 Fen Bridge/Cattle Arch bridge – just off the A47 to the east of Draytonhall Lane. Before the demise of the railway and the construction of the A47 bypass, this track would have been accessed from Fen Road. 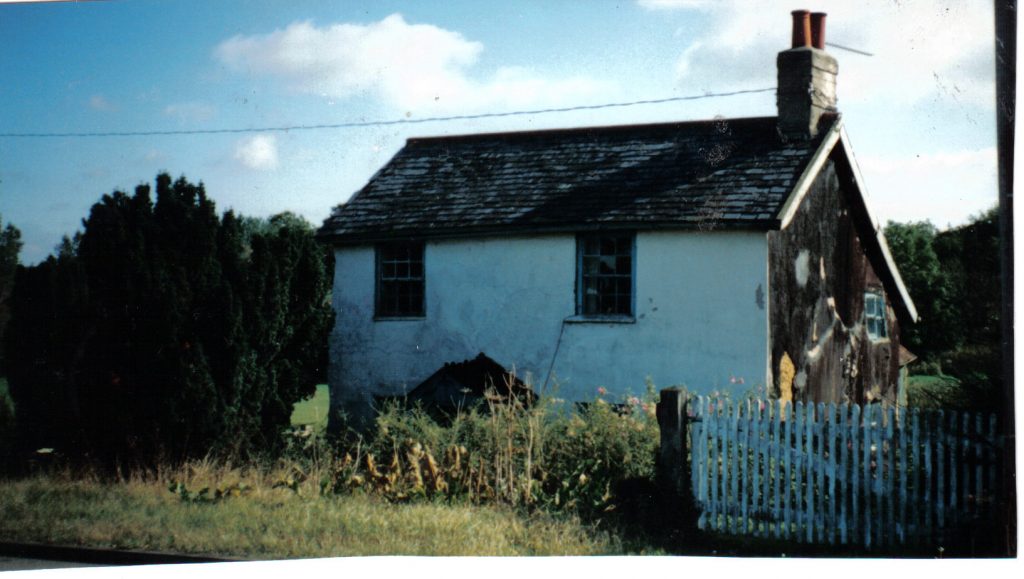 The Demolition of the Old Railway Bridge

Eric Wright used his cine camera to film the demolition of the old railway bridge to create the A47 bridge. There are two videos – Part One and Part Two

The first frames show Walter Wiggett, the crossing keeper opening the gates at Cordy’s Crossing (No.39 at 23m 37¼ch) in the 1960s. We then see a train passing over Scarning Arch on the last day of passenger services before scenes taken of demolishing the bridge in the 1970s. The bridge was No.2386 and was described as follows in the bridge register: Brick abutments, cast iron segmental arch, girders and cast iron plate floor with running timbers and open cast iron parapets. 29ft 10in span, 55ft 9in skew, 27ft 3in wide, 21ft 8in high.

The railway passed over the A47 trunk road. The arch was removed first on 11th April 1970, following impact from a lorry. The brick abutments remained in place until removed to make way for the Dereham A47 bypass in 1976. It is quite surprising that such an iconic bridge was so rarely photographed. The ornate cast-iron arches were replaced by a very dull concrete bridge. I doubt that many motorists will appreciate what used to exist here as they fly past.

The Health and Safety of the day is quite shocking compared to today’s standards with no protective equipment, working at height with no safety gear and dynamiting a bridge with the road beneath still open to traffic!