Ever thought of joining your local WI group?

The Scarning ladies meet in the Village Hall, at 7.30 on the last Wednesday of the month. We have a friendly group of 33 members.

We have visiting speakers, who give talks and demonstrations on a wide range of topics. Sometimes we have a quiz or games and then finish the evening with a social time when refreshments are served and of course (it goes without saying) there is cake!

Outings are arranged throughout the year. In October we usually hold a very successful Craft Day where WIs from the surrounding area join us for a day of crafting.

If you would like to come along to a meeting you would be most welcome. The annual subscription for this coming year is £43.00 payable at April’s meeting. There are no other meeting costs unless you wish to purchase a raffle ticket of course. 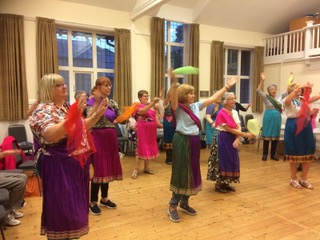 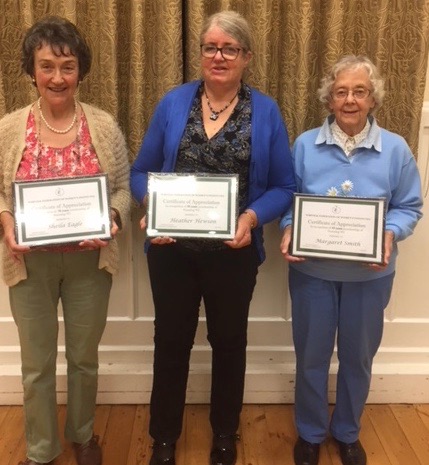 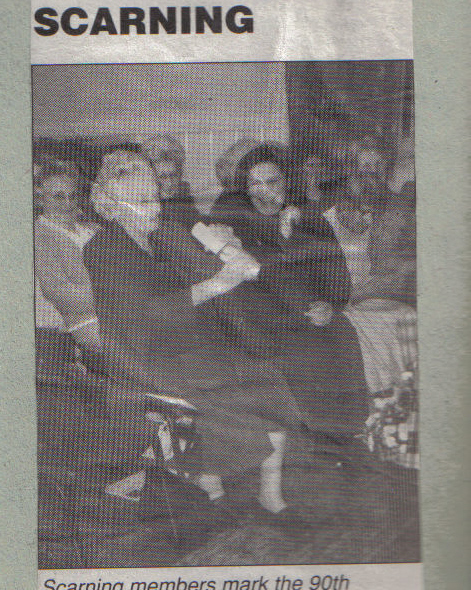 Mrs Allwood, WI founder in 1998 at the 45th anniversary of its founding

The formation meeting took place on 20th February 1952 at 7.30 pm at Scarning Village Hall. 42 ladies were present. A resolution was proposed by Mrs Duigan and seconded by Mrs Roper to form an institute in Scarning and was unanimously adopted. The following bye-laws were passed –

It was agreed to hold the first institute meeting on Wednesday 5th March at 7.30. (curiously not the last Wednesday of the month!!) Nominations for the committee were received by Mrs Broke.

On March 5th 56 members attended the meeting and a ballot was held to elect the committee. Tea was served and a discussion of future events took place. The meeting closed with Auld Lang Syne.

The first proper meeting of Scarning Women’s Institute took place on 26th March 1952. 53 members were present. Mrs Allwood the president was in the chair.

The 10/- effort to support county funds was discussed and entered into as was the London AGM although a delegate was not sent. It was agreed to hold a monthly competition and a bowls club was formed.

A talk and demonstration on the art of glove-making took place. This was followed by tea and charades. The meeting closed singing the national anthem at 9.40 pm.