Scarning had a church dedicated to Saint Botolph as is recorded in the Index Monasticus but, the chapel’s last mention was just before the reformation in 1514. There are over 70 such churches in England and so far details of 40 of them have been published in The Botolphian, the monthly newsletter of the Society of Saint Botolph www.Botolph.Info

The Church of England church in Scarning dates from the thirteenth century, but there was also an ancient chapel in the village, known as St Botolph’s. Records show that in 1210, William de Draiton. who lived at Drayton Hall, one of the village’s three manor houses, presented the mediety (or share) of Scarning Church to the Abbey of Waltham Holy Cross in Essex. Shortly afterwards, the Abbey was assigned a piece of land in Scarning known as Sponesbrugge (later Spoon Bridge) and a meadow between the chapel of St Botolph and Sponesbergh.

An extract from the will of Walter Jenyor of Skerninge, (the village has for centuries been known by many different spellings) dated 22 June 1504, in which he left a small legacy toward the repair of ‘Sainte Botulphe’s Chapell’, and a donation from William Pynchebeke ‘to the gilde of our lady in Skernynge,’ confirms the existence of this little known part of the village’s history. There is also reference to an acre of land at ‘Saint Buttolphes lane’ in the Court Books of Scarning Hall (located near Hill Rise), while in his will Thomas Hoo left six shillings to ‘the fratenite or gilde of Saynt Bothulph’.

According to L W Reynolds there is mention of a St Botolphs Chapel (but no evidence of parochial use) in both the History of Norfolk 1805 Francis Blomefield Vol and History and Antiquities of The County of Norfolk 1781 M J Armstrong.

Early St Botolph Churches (i.e. those founded in C7 or C8) tend to have similar characteristics:

1. All are in the eastern half of England
2. Most have Saxon foundations.
3. Many lie with 3 miles of a Roman road or well-used waterway.
4. Most are situated close to the bottom of an escarpment but well clear of water levels.
5. Many are strategically placed in areas which represent the beginnings, middles and ends of long journeys.

But where exactly was the chapel? There are at least two theories.

The first theory places it on the site of the former United Reformed Chapel on Chapel Lane, which still exists as a building but is now a private dwelling. That theory is shown in the aerial view and topographical map below. 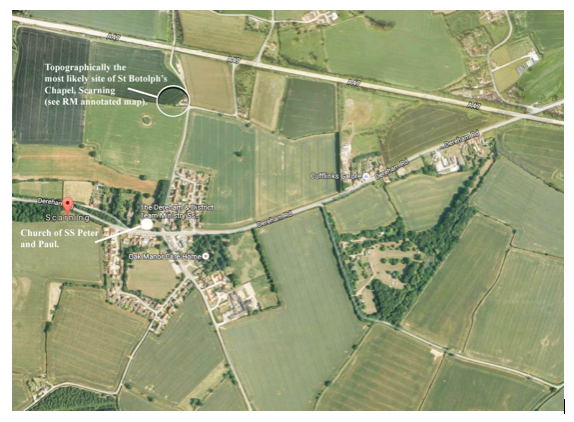 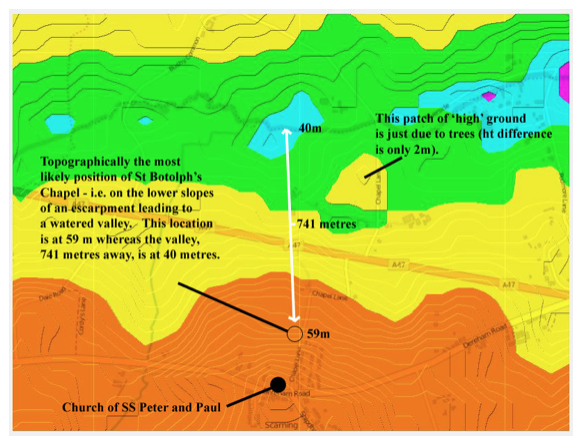 However, Scarning born Andy Eagle has a completely different theory for the location of St Botolph’s Chapel, which places it on the Dereham Road near to the Church. He writes –

“The location of the chapel dedicated to St Botolph is unknown and few, if any, villagers will have any memory of it or the area known as Spoonbridge.  This part of the village and the chapel were mentioned in records from the reign of Edward III (1327-1377), usually in the wills of local worthies gifting land to Waltham Abbey, for example:

Ralph, son of Peter, gave them his meadow between the chapel of St. Butolph and Sponesbergh.

Moving forward to the 16th century, the “guild or fraternity” of St Botolph appear in records, as the recipient of bequests from Scarning landowners John Sekker and Thomas Hoo.

The final record of Spoonbridge which I could locate was from a “Terrier of all the Glebe Lands” from 1747 and a description of “Lands belonging to the poor of the parish church of Scarning, namely one piece of meadow of about 4 acres abutting upon the Kings Highway leading from Scarning Church to Spoonbridge on the South & upon the Lands of Eliz. Batch towards the North upon a piece of Land called Hollcraft on the East and the Lands of several persons on the West now in the Occupy of Matthew Sherret at the yearly rent of 50s.”

Recently, the former “chapel in the valley” has been mooted as a possible site of St. Botolph’s chapel, but I was doubtful of this and decided to do some research.  The first puzzle was interpreting the 1747 description of land near Spoonbridge and trying to link it to existing maps of the village, not easy since the earliest one dates from 1814. The land mentioned is indicated below in fig.1, although the landowners had changed.

The map from 1906 shows the land still part of the Scarning United Charities, as it indeed remains today. This OS map shows a field to the right of the stream with an area of 3.619 acres which appears to match the location and size of the “Scarning Town” land in the 1747 map.

Finally, the modern map in fig.3 highlights the location of the stream running south to north, now as a piped ditch going under the main road. This would have been forded or bridged in earlier times and it would seem to be the obvious position for “Spoon Bridge”.  This would also suggest that St Botolph’s Chapel was closer to the village church after all…so perhaps we are a bit closer to solving the mystery of this popular Norfolk saint and patron of wayfarers…but I would love to hear from anyone who can shed any further light on the matter!” 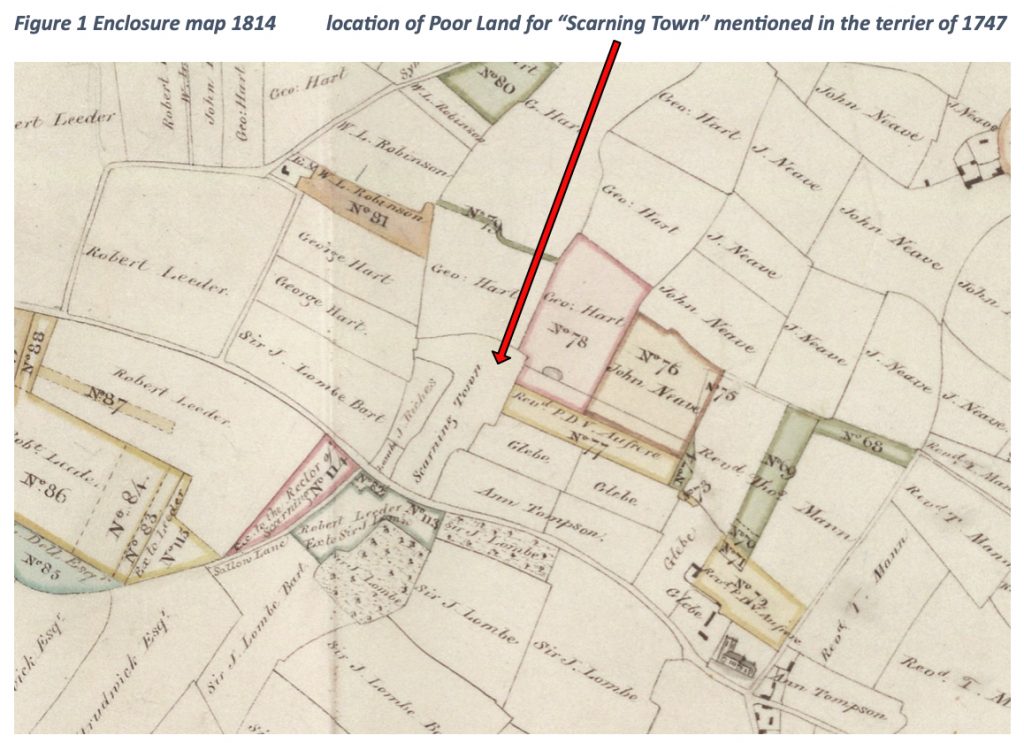 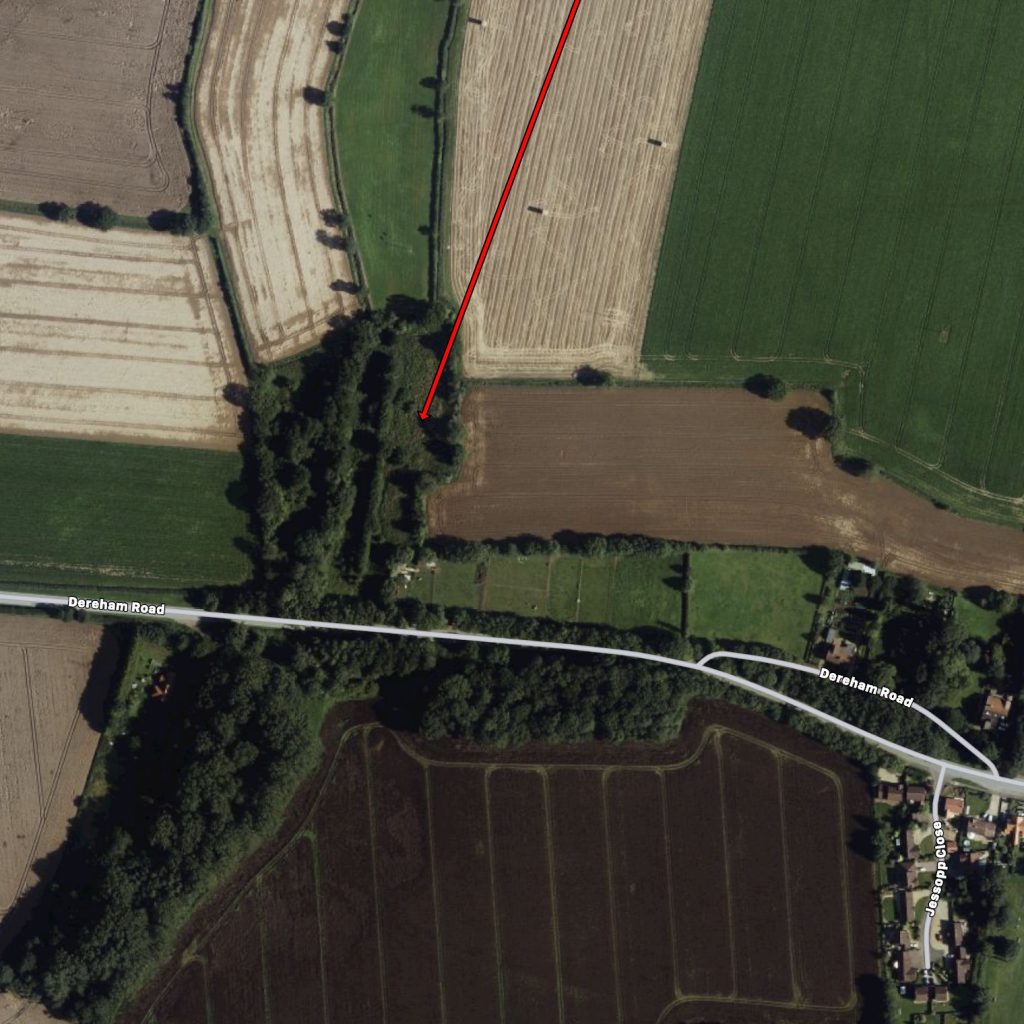 So, can you can throw any light to solve the Mystery of St Botolph’s Chapel?

The administrator of Society of Saint Botolph would be most grateful. Please contact –